Mortar Tossers - What a Silly Ban 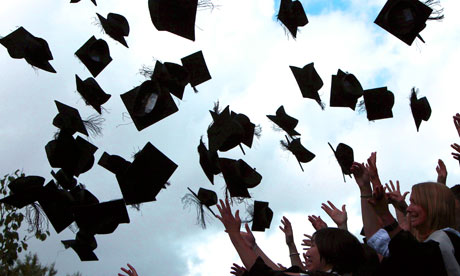 The news that one UK university has banned the throwing of mortarboards in the air on graduation day has not impressed the HSE.

It is an issue that has pub bores choking on their pints of lager – a question of heath and safety gone mad when the University of East Anglia declared this week that it would not allow the traditional throwing of mortarboards into the heavens on graduation day.

A university spokeswoman made it clear that injuries caused by falling mortarboards were an 'unacceptable risk'. She continued by insisting the university wanted to: "Ensure no student's graduation day is ruined by the potential for avoidable injury. This has been agreed by our academic dress suppliers (who often receive back damaged mortarboards) and our photographers.”

The university offered an alternative – graduands [sic] could pretend to throw ‘mortarboards’ in the air and by the magic of Photoshop, they could ‘appear’ in the official version for £8. The university spokeswoman also pointed out to TWinFM that it had, in fact, not introduced a policy banning the throwing of mortarboards per se. “We have simply asked our photography supplier not to encourage it during large group sessions. In each of the last two years students have suffered facial injuries. Last year a student needed treatment in A&E, so this is not just due to request/complaints from robe suppliers.”

This is not the first time that health and safety has been flagged up by an academic institution. In May 2008 Anglia Ruskin University warned that a corner of a mortarboard could damage a person. The university's website was employed to point out that graduands should not throw their hats up into the air...‘This not only causes damage to the hats but it can also cause injury if the corner of the hat hits the graduand or others who may be nearby.’

The mortarboard ‘threat’ at the University of East Anglia has been dismissed by the HSE as a storm in a teacup and another example of providing the likes of pub bores with ammunition (but not the offending mortarboards) to throw in its direction.

“You’d think universities would study history and do a bit of research before repeating tired health and safety myths like this one,” groaned Geoff Cox, Head, Public Sector, HSE. “The banning of mortar board tossing on supposed ‘health and safety’ grounds is one of our most popular myths and actually appears in our Top 10 all-time worst health and safety excuses.”

Mr Cox observed that as far back as 2008, HSE had made clear the law did not stop graduates having fun and celebrating their success in the traditional fashion. “The chance of being injured by a flying mortar board is incredibly small and it’s over-the-top to impose an outright ban,” he insisted. “We usually find the concern is actually about the hats being returned in good condition.”

Picture:   Still go to town for those in gown – HSE has dismissed there is a health and safety issue although the University of East Anglia has banned throwing mortarboards on graduation day on those grounds