Not a Pretty Picture as Strike Goes Ahead 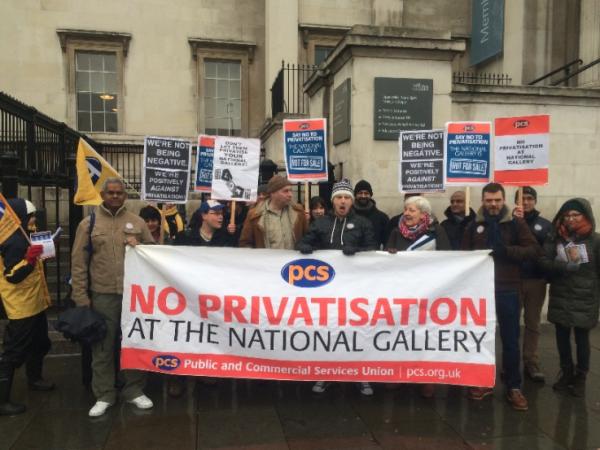 The second five-day strike by members of the Public and Commercial Services union (PCS) at the National Gallery in London began on Sunday, 22 February and will end on Thursday, 26 February.

The long running dispute which TWinFM covered in our 30 January 2015 issue (Winter of Discontent - Even National Gallery Faces Strikers) sees both sides digging in over the fight on whether a private company – CIS – will take over the duties of ensuring the security of the exhibits and information services at the gallery.

The bad blood between the two sides appears to have been exacerbated by the suspension of Candy Udwin, one of the PCS’s senior reps who is involved in the current talks at the conciliation body, ACAS, for drafting a question about the cost of CIS for the PCS negotiating officer. The union points out that more than 8,500 people have already signed a statement condemning what it terms victimisation and calling for her reinstatement.

For its part, the National Gallery management states that the steps it is taking are to ensure standards can be maintained for visitors. It also argues that it will be meeting one of the demands by PCS to pay the London Living Wage.

On its website, the National Gallery states: ‘In conjunction with the new roster we proposed not only to meet the London Living Wage, but to pay a basic salary in excess of it. Regardless, from April 2015 we will pay staff a top-up, which will bring salaries in line with the London Living Wage. As a result of the PCS's position, we will now appoint an external partner to manage these services. Affected staff will transfer across; there will be no job cuts and terms and conditions will be protected.’

Picture: The second five-day strike at the National Gallery in London began this Sunday over what the PCS union claims is the privatisation of services by its members.

BBC Maintenance Staff Asked Are You Being Interserved?

Engineers and technicians working at FM provider, Interserve, on a BBC contract are to strike on Monday 1st September at sites across London and at Elstree Studios (where...