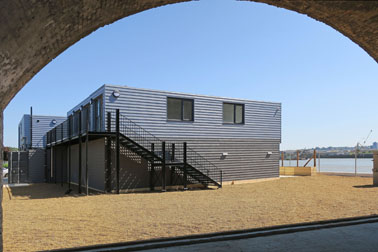 The demand for enterprise space locally is growing, with the economy worth around £4.8 billion and with more than 17,460 businesses calling Medway home. The area’s target growth rate is twice the national average and as per Medway’s Local Plan, 17,000 jobs are set to be created by 2035. 2015 GVA (gross value added) figures show a 5% growth on the 2014 level, which is more than the South-East and UK growth of 3.2% and 2.6% over the same period.

The Studios comprise 15 office spaces and 18 storage units which has been created using a kit of moveable and reusable parts based on shipping containers. Almost £1 million has been invested in the project with £600,000 of the build cost secured via the Coastal Communities Fund.

The build, which started in February 2017 with the basic units assembled in just two days, was managed by CargoTek which specialises in shipping container buildings and QED Sustainable Urban Developments was responsible for the detailed design.

The development, located on a previously under used piece of land on the banks of the River Medway, is part of the council’s 20-year programme to regenerate Medway as a whole and make Watermill Wharf a hub for businesses.

The Innovation Studios Strood is the second project in Medway’s growing ‘innovation business series’. The Innovation Centre Medway (ICM) based at Rochester Airport opened in 2009 fuelling the council’s vision to make Medway an even more desirable place to do business, with excellent connections to the capital and continent.

Companies based at the new premises will benefit from the business support services provided at ICM, such as meeting rooms, networking events and training opportunities.

With 13 of the 15 Innovation Studio Strood units already reserved, there’s an appetite from the council to get going on its next business hub