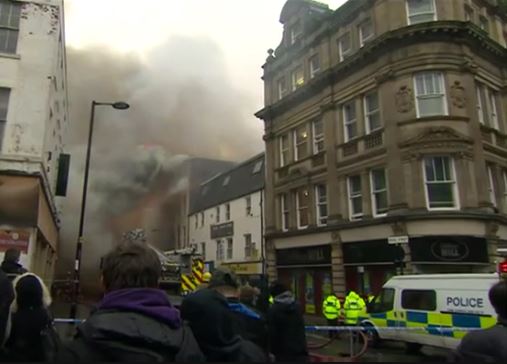 The following update was received on Weds, Dec 3 in relation to a fire in Newcastle city where one person lost their life.

Northumbria Police and Tyne and Wear Fire and Rescue Service are continuing to work together to investigate the cause of a fire that destroyed a large section of a building on Cross Street in Newcastle city centre on Tuesday, Dec1.

The damage caused by the fire has made the structure of the building potentially unsafe and so it has been extremely difficult for fire and police officers to get inside the building and carry out a full investigation of the premises.

The cause of the fire is unknown at this stage and a full investigation will be carried out.

A limited search has been undertaken and a body has been located in the building. Although a formal identification has not been made it is believed that this may be the body of an 81-year-old man.

Northumbria Police Superintendent Bruce Storey said: “This is a very difficult and complex investigation due to the nature and severity of the damage caused to the building and detectives are working alongside specialist fire investigation officers and structural engineers to carry out enquiries as to how and why the fire started.

Assistant Chief Fire Officer John Baines, Tyne and Wear Fire and Rescue Service said: “Business owners always need to be vigilant especially in the run up to Christmas when there is increased stock and customers which can increase the risk of fire.

“This incident is a reminder to all business owners to reflect on the fire safety measures they have in place and to make sure their Fire Risk Assessment is up to date, ensuring it considers all persons in and around the premises.”

Picture with thanks to the fire service and the BBC: More than 50 firefighters were at the scene at the height of the fire