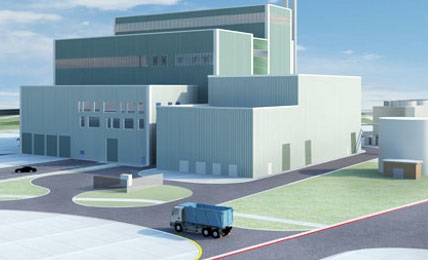 A protest has been organised over the alleged exclusion of locals from jobs on a construction site in favour of cheaper labour where only one in ten speaks English.

The GMB union has been arguing that the employer, SITA SEMBCORP UK, a consortium led by SITA UK, is paying migrant workers £5 per hour less than agreed rates that has saved the company £4 million so far in labour costs.

The union believes that this has been at the expense of unemployed local workers who could work at the Wilton site which is a new purpose-built, energy-from-waste facility run by SITA for Merseyside Recycling and Waste Authority. The new facility is expected to generate electricity for the equivalent of 63,000 homes.

“SITA is not playing fair by the Teesside workforce,” declared Phil Whitehurst, National Officer, GMB. “SITA has discriminated against them by giving them no chance to get up to three quarters of the 400 jobs on the site at the construction phase of the job.”

Picture:    Artist’s impression (2013) of the energy-from-waste facility at Wilton, Redcar which is already the scene of industrial action by the GMB union.

The bitter dispute between the GMB union and SITA Sembcorp UK at the Teesside Waste To Energy Construction Site in Redcar carried on over the weekend. The rally on...