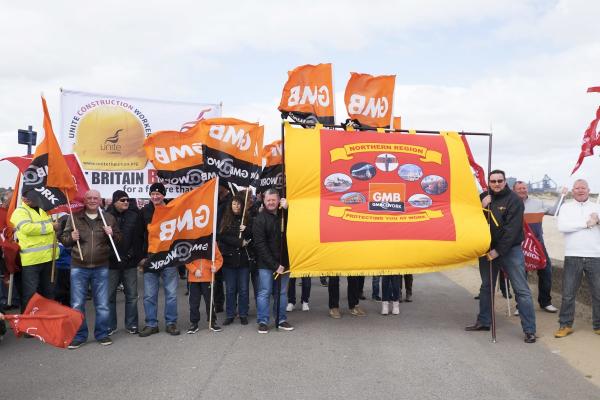 The bitter dispute between the GMB union and SITA Sembcorp UK at the Teesside Waste To Energy Construction Site in Redcar carried on over the weekend.

The rally on Saturday was called by the GMB over what it alleged is the use of low paid ‘migrant workers’ that have undercut local workers and may be compromising health and safety because of language concerns (see last week’s TWinFM). http://www.twinfm.com/article.php?artid=1940&title=News&article=one-in-ten---are-english-speakers-just-a-number-on-a-list?

For its part TWinFM has obtained a rebuttal of the charges made by the GMB fro SITA Sembcorp UK. A spokesman for the company stated:

“It’s important to provide some context here – none of the people working at the Wilton 11 site has been involved with any of the protests that have taken place so far.  The facts are:

The two sides appear to be as far apart as ever and the GMB contests the points made by SITA UK.

Picture:   The GMB members were out in force on Saturday to highlight the continuing dispute with SITA Sembcorp UK.

A protest has been organised over the alleged exclusion of locals from jobs on a construction site in favour of cheaper labour where only one in ten speaks...