Paramount Park's Got What Walt Disney 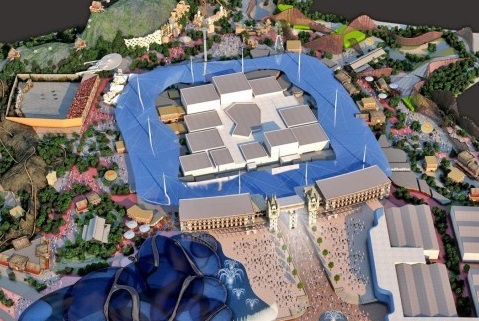 A 'project of national significance' status has been awarded by the Government for a theme park which was first mooted in October 2012 to be built near Ebbsfleet in Kent - home to Ebbsfleet International a key rail station on the Euro Line. This status will allow fast-tracking through the planning and consent regime thus bringing forward the build and open time by a year from 2019 to 2018.

It is hoped that this easing through the planning minefield will see the development through - unlike the failed bid to attract Euro Disney twenty-five odd years ago (Euro Disney eventually opened outside Paris in April 1992).

The theme park, to be developed by London Resort Company Holdings and branded Paramount (Paramount Pictures Licensing Division has just concluded the agreement) is expected to rival Euro Disney in size and attractions and will employ up to 27,000 people.

The site will be complimented by a new 15,000 homes garden city also being proposed for Ebbsfleet which has Government and local government backing. The employment prospects are seen as likely to push the prices for homes on the finished development up a notch along with other homes in the area.

Ebbsfleet is in the Thames Estuary which is still a proposed location (by Boris Johnson) for  a new international airport to serve London.

London Resort Company Holdings has a net value of approximately £1.5million despite very low asset value. it has seen a number of senior director changes in the past year. No members for parliament declared an interest in the company at the time of the Paramount/status announcement.

The exact location of the theme park is the brownfield, 872 acre, Swanscombe Peninsula. Paramount's licence will be for the now familiar film themed rides. The site will have the largest indoor water venue in Europe - it has not been announced if this will include film franchise branding.  The park also will feature hotels, event and live music venues, cinemas and restaurants.

The current landowner is Lafarge, the property company is Development Securities and the proposed builder Brookfield Construction - along with specialist theme park ride developers. Chris Townsend of who helped bring the developments for the Olympics together has been recruited to add his drive to the plan.