Pictures Worth a Thousand Words 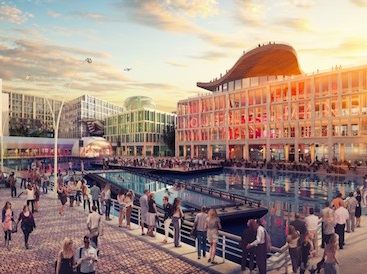 New images have been released of the new £3.5 billion Silvertown scheme in East London that recently received Mayoral approval.

The transformation of this 62-acre site at the heart of The Royal Docks will create 5m sqft of commercial space (office, retail and leisure), up to 21,000 new jobs, 3,000 homes and an additional £260 million a year to the London economy.

The first phase which aims to be finished by 2018 in time for the new Crossrail connections, will see the 450,000sqft Millennium Mills site brought to life.

From 2018 Silvertown London will be serviced by Crossrail providing direct connectivity across London which complements existing DLR services and the adjacent London City Airport providing frequent, direct links to Europe and beyond.

“We were delighted to receive the go-ahead for this vital scheme,” said Simon Webster, CEO, The Silvertown Partnership. “This part of London is now destined to be a creative hub for our capital, offering a new, easily accessible location for a range of businesses as well as housing for Londoners and new brand experiences to attract local visitors and tourists alike. It is a much-needed scheme for this part of London, creating opportunities for employment and long term benefits for the local economy."

Picture: New images of the Silvertown project in East London have been released