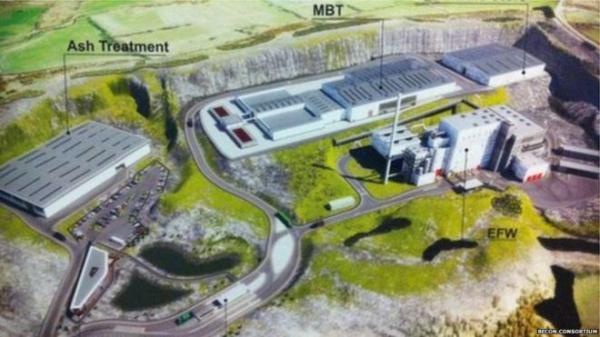 A proposed £240 million waste incinerator on the outskirts of Belfast has been rejected by the Environment Minister.

The incinerator caused a sizeable campaign against it from many parts of the local community despite the prospect of the jobs it would have created in the Hightown area, site of a disused quarry.

Arc21 – a waste management group in Northern Ireland representing six councils in the east of the Province – had proposed a recycling plant and incinerator that would have created more than 300 jobs and have taken waste from 11 of the former council areas in Northern Ireland.

In turning down the project, Environment Minister Mark Durkan believed that the incinerator would not have had the desired benefits in terms of its environmental impact and health for the local people.

In his letter on the subject, he commented: ‘I am not satisfied that this development, in the context of the zero waste program [sic], will not cause harm to human health and would share the fears of the public representations in this regard. Therefore I consider the development should be refused.’

Mr Durkan did not accept planners’ recommendations who had accepted the project and felt that, if anything, the incinerator facility could have a negative benefit to recycling. ‘This development could result in an increased market for waste disposal and to maintain a facility such as this, in addition to the other approved waste facilities, could discourage recycling.’

Sinn Fein had campaigned hard against the incinerator and could not hide its delight that the project had been rejected. “This is the correct decision and it’s one taken on the back of a well organised community campaign and a volume of objections based on logical community concerns,” declared Gerry Kelly, MLA, Sinn Fein. “This is the second successful campaign to stop an incinerator, including the Lough Shore plant that I have supported within the North Belfast area and praise must go to every single group, individual resident and political activist that worked to get this positive outcome.”

Mr Kelly stated that he believed the proposal itself was “highly unpopular, was contrary to local residents wishes and its viability ran against the growing success rates of councils to reduce, recycle and reuse waste”.

"This is the second successful campaign to stop an incinerator including the Lough Shore plant that I have supported within the North Belfast area and praise must go to every single group, individual resident and political activist that worked to get this positive outcome.

Arc21 said it was ‘very disappointed’ at the refusal. “Given the importance and complexity of the issues involved, Arc21 will take time to consider the notification in detail before making further comment said a spokesperson.

Picture:    The proposed incinerator and recycling facility at Hightown near Belfast has been rejected by Environment Minister Mark Durkan.