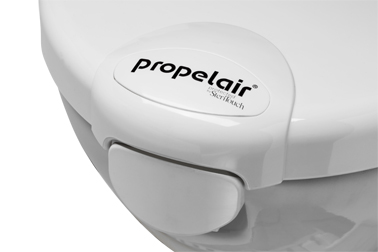 Propelair, a ThisWeekinFM Partner, has seen Investec and fund managers Earth Capital Partners (ECP) and Universal Partners (UP) make a substantial investment in the maker of the world’s leading low water usage toilet.

ECP was already an existing shareholder and has now increased its shareholding, whereas Investec and UP are new investors. They join the founder, Garry Moore and Woodford Fund Management on the share register.

Propelair was launched in 2013 and has gained significant traction in the UK market having now installed its low water usage toilets in prominent organisations and buildings within the financial, government, educational, entertainment and retail sectors across the country.

The patented Propelair toilet technology overcomes the problems of existing dual-flush toilets by giving a powerful, leak-proof flush that virtually eliminates blockages, which are a major source of additional cost and down-time for commercial customers, while using 84% less water than an average toilet.

Propelair has reinvented the toilet and the world is taking notice

David Phillips, head of Investec Emerging Companies said: "The investors have participated in a two stage £8 million recapitalisation of Propelair, with the majority of proceeds being injected into the company earlier this year."

Investec has led the raising and will be Propelair's largest shareholder followed by Earth Capital Partners and Universal Partners. Existing shareholders are all able to participate in the second stage of the recapitalisation so as to benefit from the expected growth of the business as it cements its footprint in the UK and starts its overseas expansion.

The capital is being used to strengthen the business and to fund the hiring of additional resources to help with the expansion, including the recently appointed new CEO, Dylan Jones, who has significant experience in growing other businesses that were at a similar stage in their lifecycle.

David Phillips added: “From the moment I saw the product and met the company I was sold. To quote Elon Musk, ‘Great companies are built on great products’. On this basis Propelair is going to be a great company.”

In addition to the investment in the company, Investec is currently trialling the product in its London headquarters, with a view to a potential roll-out. Four Propelair toilets were initially installed at Investec’s Gresham Street office, which saved 31,000 litres of water within the first 25 days.

Garry Moore, Propelair founder said: “It’s great to have Investec, ECP and Universal Partners become significant stakeholders in Propelair. Their investment will be used to continue to build market presence in the UK and to accelerate offshore expansion. For example, toilets in EU countries currently flush away 102 billion litres of clean, potable water every day. That is enough to drain Lake Geneva every 20 hours.

At just 1% market penetration, Propelair toilets can save nearly 6 billion litres of water every day. The world needs this product and we are going to bring it to them.”

Dylan Jones was instrumental in the global growth of brands including Jaeger, Tetley Tea and Bunzl. Most recently he has been CEO of Selecta UK/Benelux, and prior to that of Staples Southern Europe.

Picture: Propelair’s prevents the unnecessary use of water for flushing, whilst providing a better, more hygienic and environmentally beneficial solution

UK toilet manufacturer Propelair has designed toilet flushing with a system using air and only 1.5 litres of water. The technology has already been adopted by a...