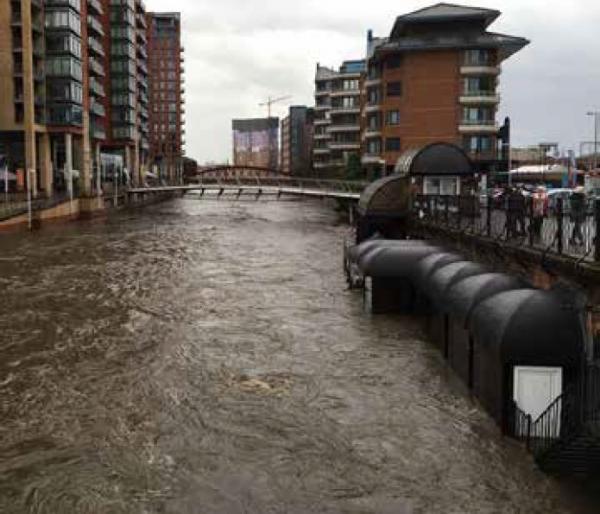 New data released on February 7 reveals that recent storms and flooding caused more than £3.5 million worth of damage across 57 cricket clubs - why the focus on cricket? Well The Climate Coalition’s 'Show the Love' campaign kicked-off at Lords - which become the first cricket ground in the country to run on 100% renewable energy.

The Climate Coalition’s ‘Weather Warning’ report also showcased how many of the nation’s favourite places are being damaged by extreme weather - with the organisation linking this to climate change. The headline stats were compiled by the Marylebone Cricket Club (MCC - owners of Lord’s) and relate to damage in December 2015.

Two of the affected clubs, Sowerby Bridge in Yorkshire and Appleby Eden in Cumbria, are yet to return to their home grounds due to the extent of the damage suffered. The England & Wales Cricket Board distributed more than £1 million in emergency funding to flood-affected clubs in 2016, with a further £1.6 million earmarked for 2017.

Derek Brewer, MCC Chief Executive, said: “It is important that all organisations embrace sustainability and I’m very pleased that Lord’s has become the first cricket ground in the country to run on 100% renewable energy. The statistics released today illustrate the effect that changing weather patterns can have on cricket, and the ECB deserve a lot of praise for the support they give clubs across the country that are so badly affected by extreme weather.”

Colin Butfield, Director of Campaigns at WWF-UK, and member of The Climate Coalition Board, said: “The quintessentially British sound of leather on willow in the summer months is being disrupted by increased rainfall and flooding that is scientifically linked to climate change. It is affecting cricket grounds and many other of the UK’s favourite places, landmarks and landscapes. These are yet more warning signs that human activity is impacting Britain.”

The Weather Warning report was analysed by the Priestley International Centre for Climate at the University of Leeds. Professor Piers Forster, director of the Priestley Centre, said: “UK weather will always bowl us the odd googly but climate change is making them harder to defend against. The science has now developed to the point where we can say whether the likelihood of a particular bout of weather has been increased by climate change. We know that climate change made the record wet weather in December 2015 considerably more likely. The trend towards more intense rainfall is clear and it’s great to see MCC, ECB and The Climate Coalition raising awareness of these challenges that aren’t just affecting people in other countries but are having impacts right here in the UK."

What's it all about?

The Climate Coalition, members include WWF-UK, the RSPB, the National Trust, The Women’s Institute and Christian Aid. It also accompanies the publication of a ’Weather Warning’ report highlighting how extreme weather conditions are affecting some of Britain’s favourite places - from our gardens to our local pubs, our rivers to our parish churches, our iconic cliffs to our favourite woodlands.

Show The Love is an annual celebration of all that we love but could lose to climate change and the progress we are making towards a clean and secure future. The campaign encourages people to wear and share green hearts to demonstrate their support. As part of the campaign, and bringing the Weather Warning report to life, Ridley Scott Associates have made ‘Love Song’, a three minute film featuring Charles Dance, Miranda Richardson, Elbow and the NHS Choir, urging the British public to protect the places, people and life we love from climate change.

The Bad and the Ugly - Making Good on Cable Spaghetti

Offices up and down the country are seeing changes as employers seek to increase workplace productivity, reduce costs and respond to requests for varied working...

At a recent FMA networking event, held at one of Royal Bank of Scotland’s prestigious building in the City of London, Banner Business Services took an unusual...