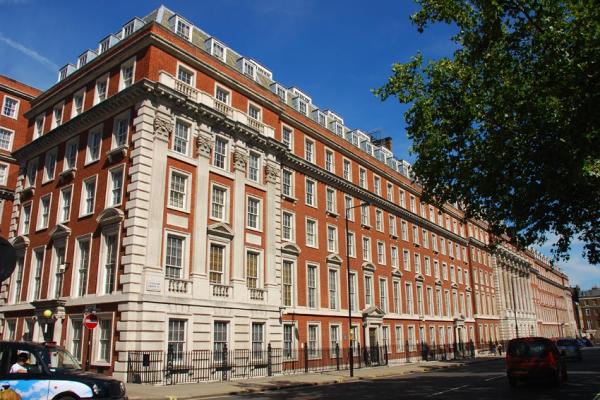 The death this Monday of a Lithuanian worker on a refurbishment site in Grosvenor Square, central London, follows a report the day before in The Observer, claiming that with increased building activity, accidents are bound to rise around the country, due to poor training and reduced surveillance by the Health & Safety Executive.

The victim was 33-year-old Dainius Rupsys who was working on a site in Mayfair that was being converted into luxury flats in a £250 million conversion of a former US Navy headquarters opposite the US Embassy (pictured), which itself is due to close and move to near the Battersea Power Station redevelopment.

McGee, the contractors on the job said: "Dainius was a popular and valued member of the team and will be missed by us all. He was a father of two. Our thoughts are with his whole family at this very difficult time."

According to eyewitnesses, the man was working on a lower floor when a mini-digger fell through the second floor of the gutted building, killing him instantly. He was pronounced dead at the scene. An HSE spokesman said a thorough investigation would take place but stated: “We are not yet sure if the man died from a crush or a fall. There will be a thorough investigation for as long as it takes.”

McGee said the accident happened when a slab gave way and fell down to the next level along with the machinery being used to break through it.

McGee’s statement added: "It would be irresponsible to comment further until a full investigation has been completed by the Health and Safety Executive. Work has been suspended while this is ongoing. We will of course provide our full support and co-operation to the investigating authorities."

The six-storey building had been bought by an Abu Dhabi company and a developer from a consortium led by the restaurateur, Richard Caring.

14 firefighters and officers from Soho fire station attended the incident along with staff from the London Ambulance Service.

In an unrelated accident on the same day, a man plunged to his death after he fell from a ladder while working on a roof of a house on Hospital Bridge Road in Twickenham. The man suffered from a number of serious injuries and was pronounced dead at the scene by paramedics from the London Ambulance Service.

Last Sunday’s Observer had pointed out that the UK construction industry was sitting on a ‘ticking timebomb’, with inexperienced workers recruited to work on London's major building sites at a time when safety standards were ‘being run down’.

The allegation has been made by a former government adviser on the sector, Baroness Donaghy, who wrote a report, One DeathToo Many, for the last Labour government. She has argued that there is a ‘severe risk’ of a rise in deaths and serious injuries as building activity picks up during the recovery.

Since 2001, 760 workers have died in industrial accidents on UK building sites. It is argued in the article that the number of site-related deaths in London, where growth in construction is strongest, has doubled recently.

Donaghy told The Observer: “If there is an upturn, as is obviously happening in London, there is a danger that skills have been lost during the recession and people who are insufficiently skilled will be taken on. And that's when the deaths and accidents will start taking place.” This, she believes, coupled with cuts in the HSE’s budget of 35% and fewer inspections, could have serious consequences.

All of this has been denied by Heather Bryant, chief inspector for construction at the HSE, who said it was adequately resourced and that construction was one of its priority areas.

When TWinFM visited the HSE site, no comment had been posted about allegations by The Observer or the construction worker’s death.