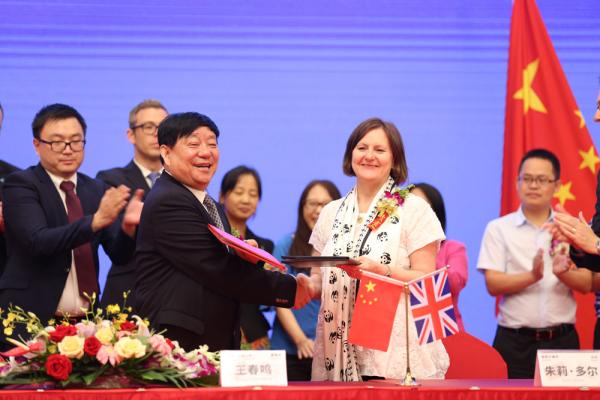 Following their return from a visit to Sheffield’s sister city of Chengdu in China, the Leader and Deputy Leader of Sheffield City Council announced this week a 60 year partnership agreement with Sichuan Guodong Construction Group, one of the largest companies in Sichuan Province.

Mr Wang, Chairman of the Board and President of Sichuan Guodong Construction Group, has visited Sheffield a number of times. He said: “Sheffield really does stand out amongst all UK cities as an outstanding business investment."

The first tranche of funding associated with this agreement is worth in the region of £220 million and will fund four or five Sheffield city centre projects over the next three years. The exact projects that the investment will fund are yet to be determined.

Councillor Julie Dore, Leader of Sheffield City Council, said: “This is the biggest Chinese investment deal to be made by a UK city outside of London. And perhaps more importantly it is first deal of its kind to be made by a UK city. The projects funded by this investment will be determined by Sheffield City Council and the 60 year commitment secures a stream of investment into our city for the next generation. This means a whole range of projects become viable because of the long-term nature of the relationship.”

Councillor Leigh Bramall, Deputy Leader of Sheffield City Council, said: “We are clear that this will create hundreds, if not thousands, of additional jobs for the people of Sheffield. The investment comes from China but the workforce on these projects will be British."

Sheffield has also recently signed co-operation trade agreements with Daqing, the leading centre for the oil and gas industry in China and location of a major World Snooker International Championship, and the city of Nanchang, to boost trade between local companies and China.

Chengdu is a city of 16 million people, the fifth largest in China, and largest in Sichuan Province in western China. The work agreement with Sichuan Guodong Construction Group is running parallel to increasing civic and cultural ties between Sheffield and the city of Chengdu.