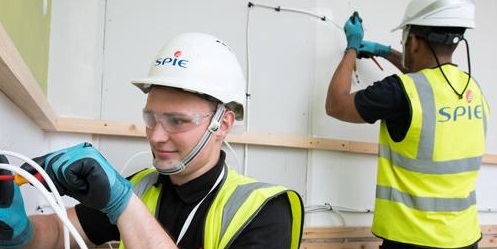 SPIE UK was awarded a £6.4m contract with Unite Students, the student accommodation provider of 50,000 students premises across 28 cities, for the refurbishment of Sidney Webb House, a building at the London School of Economics and Political Science.

As Principal Contractor and designer, SPIE has been responsible for design, procurement and site management as well as the removal and fit-out of the new internal fabrics, furniture & fixings and mechanical & electrical services.

The 11-week on-site programme (to avoid disruption to students) has been a challenging endeavour from both a technical and programming aspect because of the speed and complexity of the work. Due to the time frame, SPIE developed a complete single source solution for fast track fit-out that included innovative energy saving and engineering solutions. The programme’s design, survey and procurement was completed while the team simultaneously prepared the site logistics and terms of engagement. As a result, SPIE managed to carry out an on-site strip-out and refurbishment of 454 bedrooms and bathrooms as well as 72 kitchens over the period.

In order to incorporate the new energy saving air source heat pumps required, a challenge arose around lack of plant room space in the building. To solve this, SPIE engineered a solution using four easily-movable standard sea containers, that only take up a small footprint; self-contained with the technical components pre-fitted they were lifted into position on the roof. This resolution presented cost savings and cut 5 weeks off the programme’s critical path.