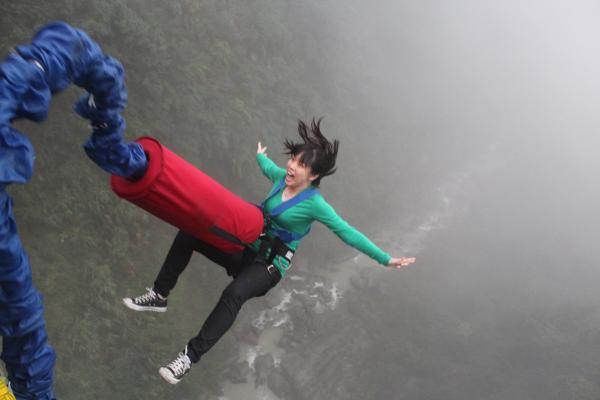 Amongst them was a woman who was seen bungee jumping on TV after claiming she injured her back at work.

Thirteen people were interviewed at police stations across England and Wales by officers from the City of London Police’s unit on 26 and 27 January; all suspected of submitting fraudulent insurance claims where they sought to claim compensation for injuries suffered due to alleged negligence of an organisation or business.

Amongst those targeted by IFED was the woman in her 20s from Salford, who made an insurance claim for back injuries she said she sustained whilst pulling a heavy laundry bag at work on 19 October 2013.

However, the insurer referred the claim to IFED officers when they discovered that she had taken part in a TV reality show and had been filmed doing a bungee jump in early November 2013 – despite later claiming to the insurers she was suffering from back injuries. Detectives interviewed the woman in Greater Manchester on Wednesday last and she was later released, with officers carrying out further enquiries in relation to the case.

In another case, a 46-year-old man from Carmarthen, Wales was interviewed in relation to a suspected false claim for £13,000. He told insurers that he had injured himself by falling on a pothole at a rubbish tip. Again, CCTV footage of the incident viewed by detectives appears to contradict his account and officers continue to investigate the case.

IFED detectives also interviewed a 52-year-old man from Bradford, who claimed he was injured after he fell from a broken chair at a casino. Although the chair was broken, CCTV footage apparently showed the man hadn’t fallen or injured himself as he claimed and officers continue to investigate whether £6,000 claim is fraudulent.

Detective Chief Inspector Oliver Little, from IFED said: “The impact of these kind of fraudulent claims is felt by everyone. Businesses suffer from higher premiums and the effect of this on small businesses in particular can be devastating. The public also suffer, because invariably these costs are then passed on to them in some form; so the notion that these are victimless crimes is a complete myth.

“The 13 people we have spoken to and interviewed over the past two days are all suspected of criminal activity. Be in no doubt, if you make a fraudulent insurance claim, we will investigate and you could end up with a caution, a criminal record or even face time behind bars.”

Mark Allen, Manager for Fraud and Financial Crime at the Association of British Insurers, said: “Insurance cheats push up the cost of insurance for all honest customers. This is why the industry invests over £200 million a year on tackling insurance scams, such as bogus claims for compensation made against organisations. Initiatives like this highlight that anyone making a fraudulent claim is more likely than ever to get caught and face long lasting consequences, including getting a criminal record and difficulty in obtaining future insurance and other financial products, such as a loan or a mortgage.”

Picture: The Bogus Bungee Jumper - for illustration purposes only; this is not from any alleged crime