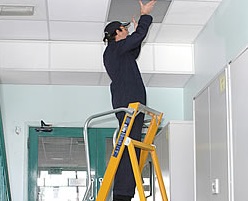 The UK division of global documents security company Iron Mountain has been fined for safety failings after an employee fractured his arm in a fall from a dangerous step ladder.

The 48-year-old, from Barking, who does not want to be named, damaged the radius bone in his left elbow in the incident at the company’s site at Cody Road in Newham on 12 June 2012.

Iron Mountain (UK) Ltd was prosecuted yesterday last week by the Health and Safety Executive after an investigation identified that the ladder he was using wasn’t fit for the purpose.

Westminster Magistrates’ Court heard the step ladder collapsed as the worker tried to reach the upper level of a racking system, sending him crashing at least a metre to the floor below. He was unable to return to work for several weeks.

The HSE established that the ladder was in a poor condition and was critically weakened by a crack that eventually caused it to fail.

The court was told it was one of two step ladders available to staff that had  cracks.

Iron Mountain (UK) Ltd, of Tooley Street, London, SE1, was fined £5,000 and ordered to pay £8,940 in costs after pleading guilty to a single breach of the Work at Height Regulations 2005.

After the hearing, HSE Inspector Monica Babb commented:“Ladders are often seen as an everyday ite m that can be taken for granted. They are not routinely checked, which is vital when it comes to identifying potential defects.

“Yet when they fail the consequences can be very serious. On this occasion a worker sustained a painful elbow injury, but it could have been much worse had he fallen from a greater height or landed in a different position.

“Iron Mountain (UK) Ltd should have implemented a more robust system for inspecting step ladders and providing replacements when defects were identified. Checking ladders is an essential aspect of safely managing work at height, and I hope today’s prosecution sends a clear message to others.”

Pictured - how to do step ladders

For the second year running the Ladder Association's Idiots on Ladders competition was inundated with entries from around the world highlighting the worst ways...