Smoke Still Gets in a Prisoner's Eyes 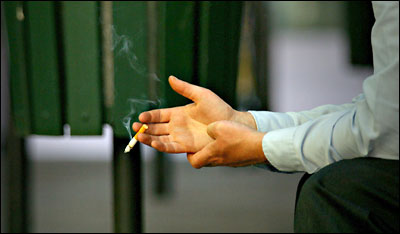 The government insists that the decision by the Appeal Court this week to allow a gradual phasing in of a smoking ban in state prisons will be a more sensible step than an immediate ban.

In 2007 the High Court had ruled in favour of a case brought on behalf of a prisoner called Paul Black, some other inmates and even prison staff, arguing that the ban on smoking in public spaces should be applied to all the 136 state prisons on health grounds.

High Court judges allowed an appeal by the government and it appears to have taken all this time for the Appeal Court to reach this decision. Critics argue that the current situation is a mess as prisons in Wales began implementing a completely smoke-free environment this January and privately run ones are already operating this ban as they are not deemed Crown properties. Currently, Scottish prisoners are allowed to smoke in their cells and in certain public areas but their guards prohibited from doing so at all. Northern Ireland also allows prisoners the same freedom to smoke.

The UK government has stated that while it had a long term plan to stop smoking completely, fears of a blanket ban would have caused problems of discipline in state controlled prisons. It is not clear why this has not appeared to be the case in private prisons that have implemented the ban.

“The result of this appeal means we are able to roll out smoke free prisons in a safe and secure way,” argued a Prison Service spokesman. “Our careful approach will ensure staff and prisoners are no longer exposed to second-hand smoke, while not compromising the safety and security of our prisons."

It is highly likely that the case will go to the Supreme Court for a final decision as it was argued that damage to health was being caused to inmates because of passive smoking.

The evidence for a smoking ban was put forward by a report – Reducing Smoking in Prisons Management of tobacco use and nicotine withdrawal – commissioned by Public Health England that was published in March 2015 which noted that 80% of the prison population smoked as opposed to 24% outside, leading to health problems for smokers and non-smokers alike. It believed that ‘comprehensive smoke-free policies can protect staff and prisoners from second-hand smoke, provide an environment conducive to non-smoking and should be promoted. However, many smokers will need support with nicotine withdrawal when placed in such settings.’

Picture: Smoking in state run prisons will continue after a ruling by the Appeal Court this week