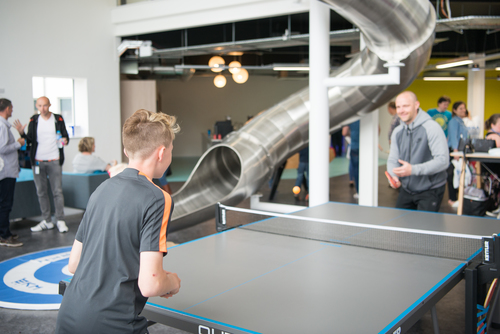 A software company, has moved into its new 23,500sq.ft head office in Preston, Lancashire. The new premises are a culmination of almost four years of designing, planning and construction and represents a £3.5m, self-financed investment for EKM.com.

The headquarters have been custom-built and include a raft of state-of-the-art office technology, an expansive kitchen, rest-and-relaxation area, training and presentation auditorium - and a soon to be infamous slide reaching three stories.

There’s also a floor which will soon house a gym, and a fully-equipped auditorium to be used for training seminars and which will be available to hire to other businesses.

Marc McKeown, head of business development, said: “These new offices help show off what we’re about. The new home currently houses its 85 employees, who have relocated from much smaller offices in nearby Leyland and Darwen. It has a total capacity for more than 250 team member."

“These are world-class facilities for our world-class team,” said EKM founder Antony Chesworth. “We’ve taken inspiration from Google and Facebook, because we want people to think of us in those terms.”

A key objective of the development was to make work enjoyable, says Chesworth: “Business doesn’t have to be boring. We’ve got a huge slide, because you can’t go down it without a big smile on your face.

“If your team love what they do, they’ll keep doing it and get really good at it.”

Sharon Snape, of Blackburn based Altitude Interiors, was one of the creative minds behind the interior design. “The brief was to make this the coolest workplace in Lancashire,” said Snape. “And I think we’ve achieved that!

“We’ve always done something that’s a bit different, a bit quirky. At EKM there’s a woodland theme downstairs and a more industrial look, with exposed lighting and trunking upstairs.

“The common theme is bringing people together, so there’s lots of open spaces and glass partitions.”

Snap added: “A nice workplace improves productivity, it makes people want to be here. This building was designed this with EKM’s team in mind, it’s all for them.”

In an age of fast paced technological innovation, people are increasingly equipped with the ability to work from anywhere at any time. While it is sometimes argued that...

Lifts/elevators in modern office buildings are creating unacceptable lift waiting times and burning as much more energy than predicted, new research reveals from...

How to Energise Morale and Commitment

After 25 years in the same building Nordic bank SEB needed to find a new home in the City of London but one that would have a positive impact on its staff by imaginative...

Companies are increasingly prioritising employee needs when making business and property decisions, according to the latest annual European Occupier Survey by the...