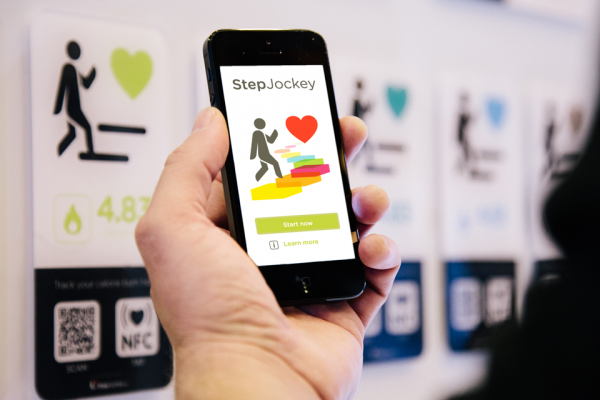 Councils from the south coast to the North East announced recently that they had completed the first of four month-long challenges in which staff ‘ditch the lift’ in favour of using the stairs – in fact, council employees burnt nearly 400,000 calories by climbing around four million stairs in 50,000 journeys between them.

Led by Environmental Officers, Directors of Public Health and elected representatives with responsibility for health and the environment, the StepJockey Local Government Stair Challenge is part of a new national push towards ‘smarter buildings and more active working’. It aims not only to boost staff health and save energy but to set an example for the wider communities for which local government now have responsibility in the areas of public health and environment.

“Increasing movement within the workplace is a vital component of any preventative health strategy and it is wonderful to see local authorities embracing this approach and leading from the front in this way,” stated Claire McDonald, Fellow of the Royal Society for Public Health and NHS behaviour change specialist. “Stair climbing is not only a powerful way to build short bursts of activity into your day but it is low cost and is accessible. It works for everyone in the office and not just the ‘sporty types’”.

The Local Government Stair Challenge is run by StepJockey, a health tech start-up which was ‘seed-funded’ by the DoH in a bid to fight sedentary behaviour within the workplace.

In the first round, teams competed via real-time leaderboards over the course of a month to burn the equivalent calories of a team scaling Mount Everest. Greenwich Council emerged as the overall winner with teams from Durham and Brent councils following closely behind. East Herts Council had the highest average stair count per person with all players completely substituting lift for stair journeys over a month.

A follow up survey of participants found that 70% reported feeling healthier as a result of taking part and 71% said they were now using the stairs more in every day.

“As an employer we are committed to creating a healthy workplace for our staff and have been pleased at the enthusiasm shown by our staff towards this scheme,” said Steve Whiteman, Director of Public Health , Greenwich Council. “They’ve seen it as an enjoyable incentive to include some additional physical activity during their working day and we’re all delighted that Greenwich was the best achieving authority.”

The second round of the Local Government Stair Challenge starts on 6 June and is now open for local authorities across the UK to enter.