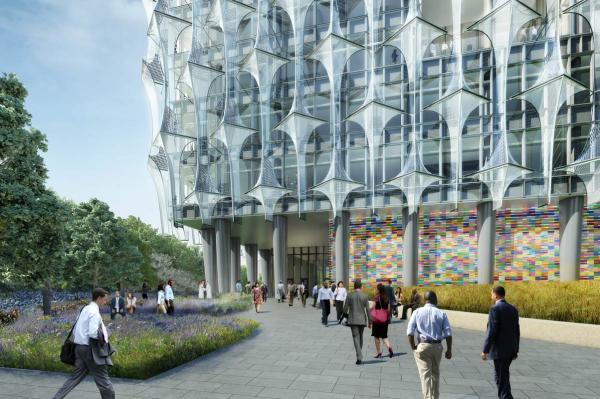 The Considerate Constructors Scheme – the national scheme to improve the image of the construction industry – has a new star ratings system which the new US Embassy in London has already achieved with a 5 Star rating.

CCS star ratings posters and certificates are available to use alongside existing Considerate Constructors Scheme signage and this will provide an opportunity for those registered with the scheme to show to the public how they have performed against the its Code of Considerate Practice.

The new US Embassy which is currently under construction in Nine Elms in Wandsworth is being constructed by B.L. Harbert International, in conjunction with Sir Robert McAlpine and is due to open in 2017.

The local council has given its blessing to the ideals behind the scheme and how it is being carried out currently on the Wandsworth site. “With so much construction activity underway, it is essential that the growing numbers of people living and working in Nine Elms have clear information about how construction sites are performing,” stated Cllr Ravi Govindia, Leader of Wandsworth Council and Co-Chair of the Nine Elms Vauxhall Partnership, said. “I am delighted that B.L. Harbert International and Sir Robert McAlpine have been recognised for their sterling work on the new US Embassy, creating an iconic new building for Wandsworth and for London.”

“The introduction of the star ratings system provides an easily identifiable and quantifiable way for the public, local community and workforce to understand the extent to which sites and companies are performing against the Scheme’s Code of Considerate Practice,” explained Edward Hardy, CEO, CCS. “This Code is designed to encourage the industry to improve the image of construction through caring about appearance, respecting the community, protecting the environment, securing everyone's safety and valuing their workforce. We believe the introduction of these posters and certificates will help to present an even more positive image of the industry to the public.”

CCS is a non-profit-making, independent organisation founded in 1997 by the construction industry to improve its image. Construction sites, companies and suppliers voluntarily register with the scheme and agree to abide by the Code of Considerate Practice. The Code commits those registered with the scheme to care about appearance, respect the community, protect the environment, secure everyone’s safety and value their workforce.

Picture: The new US Embassy currently being constructed in Wandsworth, London, has already achieved the new CCS 5 Star rating

The Considerate Constructors Scheme - the national scheme established by the construction industry to improve its image - has honoured the Most Considerate Companies and...

CLOC That - Be More Aware of Vulnerable Road Users

The Best Practice Hub - the construction industry’s free to access online platform for sharing best practice - has produced an e-learning course about Vulnerable...