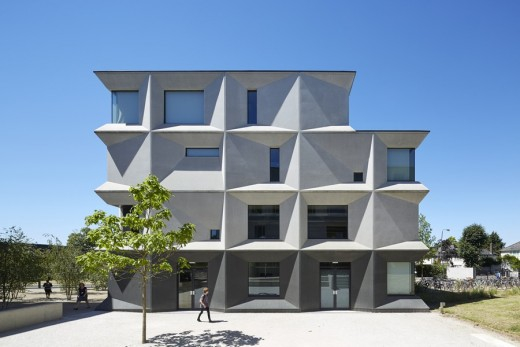 A large comprehensive girls’ school in the London Borough of Wandsworth, it won over the panel of judges for what is the UK’s most coveted award in its field.

One of the comments from the panel commented that what was achieved at Burntwood was “the most accomplished of the six shortlisted buildings because it demonstrates the full range of the skills that architects can offer to society”.

The architects created six new faculty buildings and two large cultural buildings linking original buildings by 1950s/1960s architect, Sir Leslie Martin. Every building is designed to be full of light and air with double height spaces at the end of each corridor to increase natural daylight and create well-framed views. It offers a range of teaching spaces from conventional classrooms to interactive open spaces. Already a very sculptural building, AHMM worked closely with an artist to use large, colourful murals throughout the buildings, combining signposting with modern art.

“Burntwood School shows us how superb school design can be at the heart of raising our children's educational enjoyment and achievement,” stated Speaking at the award ceremony, Jane Duncan, President, RIBA. “With the UK facing a huge shortage of school places, it is vital we learn lessons from Burntwood. I am delighted to present architects Allford Hall Monaghan Morris with the 2015 RIBA Stirling Prize.”

Picture: Winner of the RIBA Stirling Prize was Bruntwood School in Wandsworth which beat off six other entrants this year. (Photographer: Rob Parrish)