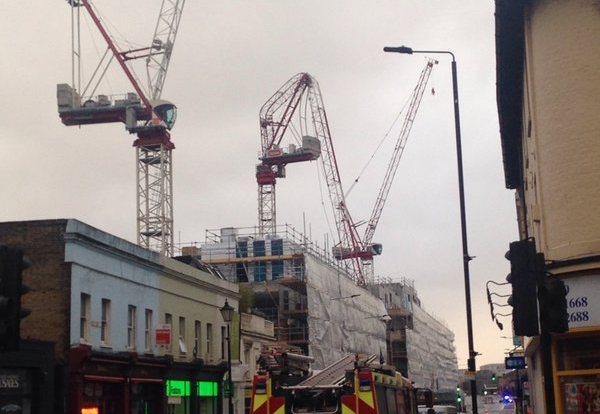 A crane at a South London construction site was badly damage due to the strength of Storm Katie which hit the country over Easter.

The incident occurred on Easter Monday when winds estimated at up to 70mph caused the jib of a luffing tower crane to fail on a site in Greenwich where the contractor, Bouygues UK is completing £20 million of work for Family Mosaic.

Police were forced to close a number of roads in the area while the crane was being secured at what will be a mixed-use housing facility.

Bouygues UK confirmed that there were no injuries and that it was working closely with the emergency services and had kept the relevant authorities informed. The other two cranes at the site were not damaged.

“Despite the continued poor weather conditions, it has been our prime objective to secure the crane and we can confirm this was done in a safe and very controlled manner,” said a company spokesperson to TwinFM. “We have now begun our investigation to establish the cause of the incident and we remain committed to working alongside the HSE in this respect.”

Picture: Storm Katie caused consternation at a site in Greenwich on Easter Monday but luckily with no injuries to workers or the public (image courtesy of @rolfey180/Twitter)