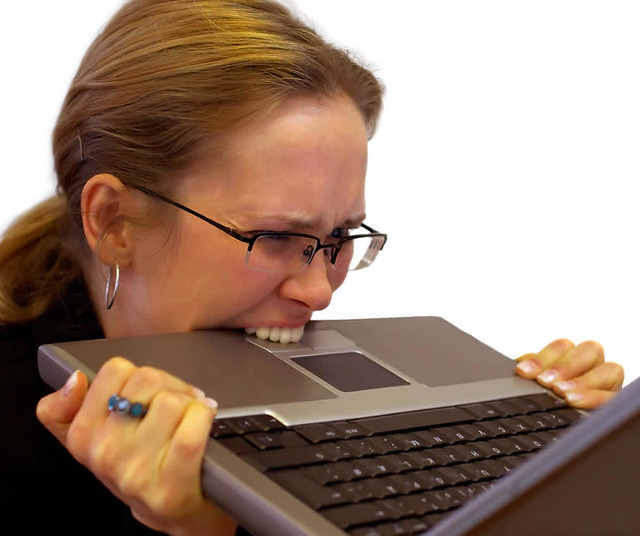 A survey has revealed that Brits are destroying their gadgets in frustration, falling out with their partners and losing working hours as a result of tech problems.

The survey was commissioned by Wiztek, a provider of online and mobile tech support. It shows that forty-seven per cent of the population admit they’re not very knowledgeable when it comes to resolving computer and tech issues.

Unable to fix troublesome tech, 15 per cent of adults have reached the end of their tether and attempted to destroy the frustrating device.

Almost eight million Brits have broken gadgets in a fit of rage the study claims.

Those polled will typically endure 63 IT issues a year - including intermittent Wi-Fi, endless pop-up adverts and patience testing paper jams.

And when trying to fix problems such as these, it’s just 12 minutes before they start to lose their cool.

In fact, the survey of 2,000 adults found a third have become so fed-up by their tech woes they’ve purchased a replacement device rather than get it repaired.

A fifth have fallen out with their other half as a direct result of their phone, computer or tablet not working as it should.

“Tech is an integral part of our lives – whether it be through our jobs or through our home lives,” said Paul Amsellem, CEO of Wiztek. “And as such, we’d be significantly hampered if we were unable to check emails for important messages, use sat nav to successfully get from A to B or to keep track of appointments.

“So when our devices stop working or don’t operate as they should it understandably becomes extremely frustrating.”

Although almost half of the population aren't good at tech issues, of the average 61 faced a year, 14 will be resolved without help. However, when attempting to fix IT and tech problems, 3 in 10 revealed they’ve made the problem worse.

So perhaps it’s no wonder three quarters have turned to someone else to help them with a tech issue. But even this comes with risk - a quarter admit they later regretted getting a helping hand when their gadgets were returned in a worse state than before.

The Wiztek research carried out through OnePoll, found 40 per cent of the population has been left unable to work following problems with IT equipment.

25 per cent have lost important files such as cherished family photos and key documents as a direct result of a tech failure.

“Tech and computing issues are such a minefield - there’s so many possible causes to everyday problems, even the most knowledgeable of people can get stumped from time to time. Downtime from tech problems can lead to many wasted hours and in today’s society where we are all so busy, time costs money,” Amsellem added.

16. Keep seeing 'there is a problem with this website's security certificate'

19. Remembering where you stored particular files/data

20. Running out of hard drive space

Wiztek offers the opportunity to connect to a tech expert anytime, anywhere on your phone, tablet or PC. An App can be downloaded from iTunes or Google Play.

Picture: Gadgets are being destroyed in frustration when they don't work.

CAFM Must Die - Cloud Claims Death-knell Is Upon Us

In real life, people are not good at recording accurate data for CAFM systems - and so those systems do not deliver the benefits they should. This was the opinion...

The free app enables users to complete an industry-specific questionnaire and receive a “readiness score”, along with safety and hygiene feedback. As...

Compass Group UK and Ireland has acquired food and health technology start-up, Feedr, in a move to "accelerate its digital transformation". The deal was...