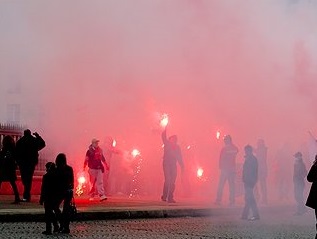 According to the BBC this week, Paris has taken a huge hit this summer in tourism numbers as has France as a whole because of fears of terrorist attacks.

A million fewer tourists (a 6.2 per cent drop) came between January and June compared with the same period in 2015 - costing Euro 750 million. 7 per cent of the French GDP comes from tourism.

Paris region tourist board head Frederic Valletoux issued a statement saying: "It's time to realise that the tourism sector is going through an industrial disaster." Ile-de-France figures show: a 46.2% decline in Japanese tourists; a 35% decline in Russian visitors; 19.6% decline in Chinese and a 5.7% decline in people coming from the US.

Bunkering down in Germany

In another - and slightly bizarre report gleaned from the Beed - the German people have been told to stockpile food and water for use in a national emergency. A Civil Defence Plan was put before government ministers on Wednesday.

'Citizens will be advised to store enough food to last them 10 days, because initially a disaster might put national emergency services beyond reach', the BBC report said.

The German news website Frankfurter Allgemeine (FAZ) said the new concept was set out in a 69-page German Interior Ministry document which said a military attack on Germany, is unlikely but a major security threat to the nation in future could not be ruled out.

A Texas judge has blocked an order by the US government that schools allow transgender students to use bathrooms consistent with their gender identity. The temporary injunction, signed by Judge Reed O'Connor, follows a challenge to President Barack Obama's directive by 13 states and applies nationwide. The injunction was passed the day before many students go back to school.

The injunction does not prohibit schools from allowing transgender students to use bathrooms consistent with their gender identity but those that don't will not have to conform.

Large phones, laptops and tablets not allowed in the cabin on flights to the UK from Turkey, Lebanon, Egypt, Saudi Arabia, Jordan and Tunisia. On Tuesday March 21 the...

The State Department issues warnings to Americans about the potential for terrorist attacks at major events, tourist sites, restaurants, commercial centres and...