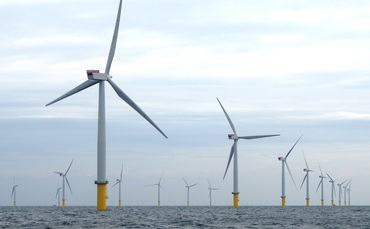 If completed the Dogger Bank Creyke Beck A and B wind project will become the biggest offshore wind project in the world. It will include up to 400 wind turbines, around 130km off the coast of the East Riding of Yorkshire.

In full operation and covering 430sq.m, the wind farm will be double the size of the current biggest facility and will have a maximum capacity of 2,400MW and will generate enough electricity to power almost 2 million homes once built. It is also expected to support up to 900 ‘green’ jobs in Yorkshire and Humberside.

“This is another great boost for Yorkshire and Humberside,” declared Ed Davey, Energy and Climate Change Secretary. “Making the most of Britain’s home grown energy is creating jobs and businesses in the UK, getting the best deal for consumers and reducing our reliance on foreign imports. Wind power is vital to this plan, with £14.5 billion invested since 2010 into an industry which supports 35,400 jobs.”

The latest announcement come on top of the announcement last year that Siemens and ABP would devote a combined investment of £310 million to develop new wind turbine production and installation facilities in Hull, creating over 1,000 new jobs.

A fly in the ointment for wind farms is the big drop in oil prices in less than a year, plus whether the subsidy regime for them will remain so favourable.

Pictured: The world’s largest offshore wind farm project – Dogger Bank Creyke Beck A and B – has got the thumbs up from the government.