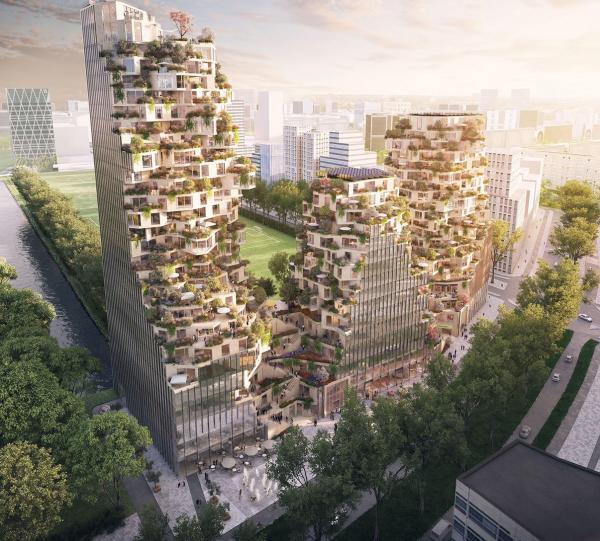 The municipality of Amsterdam has selected OVG Real Estate for the development of the plot P15 Ravel, in Zuidas, Amsterdam with a green agenda.

In the spring of 2015 the municipality began a competition process for the plot, located on Beethoven Street, adjacent to the ABN AMRO headquarters beside the Sportpark Goed Genoeg (AFC) in Amsterdam.

The aim of the competition was to realise a multifunctional building, including a mixed programme of offices, residences and amenities, covering a total floor area between 50,000m2 and 75,000m2.

After evaluating entries, the municipality selected OVG Real Estate to develop the architect MVRDV’s design. A number of possible tenants for the offices and other commercial spaces have already been involved in the project.

“Lot P15 Ravel is a unique place in Zuidas and OVG’s proposal, designed by MVRDV, has a bold and distinctive architectural appearance and marks a crucial turning point in the development of Zuidas into a mixed area with housing, employment and services,” explained Klaas de Boer, Director of Zuidas, Amsterdam City Council.

Open to the public

With the project OVG wanted to introduce an ‘innovative’ building into what is becoming an increasingly popular district of Amsterdam.

It is, to a large degree, open to the public but in a novel way the public space literally extends into and over, the building. “We are honoured to provide Zuidas with a building which carries international recognition and will contribute to a local sustainable and innovative living – and working – environment,” said Coen van Oostrom, CEO, OVG Real Estate.

“The houses have bay windows with beautiful views and large balconies with a great deal of vegetation, turning the whole building into a kind of village green,” said Winy Maas, architect and co-founder of MVRDV.

Picture: This extraordinary building in Amsterdam approaches the concept of shared residential, office and leisure facilities

Global green building is expected to double by 2018, according to a new study from Dodge Data & Analytics and United Technologies Corporation, on which the World...

Green Growth the Rush is On

Green Building Councils are joining forces with leading cities around the world to ramp up energy efficiency within buildings, under a new partnership between the World...