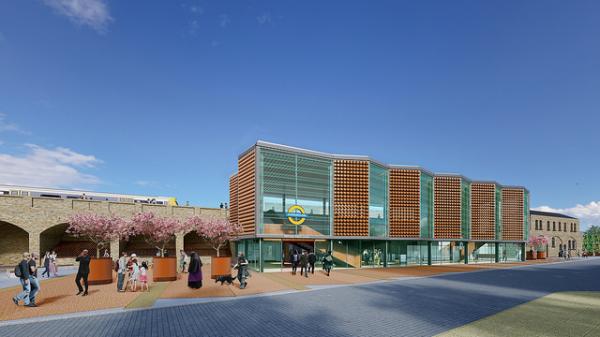 The major transformation of White Hart Lane station to make it more accessible and improve journeys for customers moved closer this week ending July 14 as Transport for London announced Taylor Woodrow, part of Vinci Construction UK, as the successful bidder to design and rebuild the station by spring 2019.

TfL and Taylor Woodrow will work together to redevelop the station, which is used by 1.3m customers a year, delivering improvements including a new ticket hall and station entrance as well step-free access from street to platform for the very first time.

The redevelopment directly supports the regeneration in the area, which includes plans for the new Tottenham Hotspur stadium, a museum, hotel and 585 new homes, as well as 2,000 homes as part of the High Road West masterplan and a further 3,000 homes in the wider North Tottenham area.

Jon Fox, TfL's Director for London Rail, said: "White Hart Lane station is set for a radical transformation to make life easier and more comfortable for customers. The station will see lifts installed for the first time, making it more accessible for everyone, and the new entrance will provide better connections with the local area, supporting the new homes and jobs being created in Tottenham."

TfL has aslo announced its partner to develop Landmark Court in Southwark - Triangle London Developments (TLD). This will be a joint venture to develop a site near Borough Market for homes and workspaces.

Triangle London Developments is a consortium of U+I and Notting Hill Housing and is one of the partners on the TfL Property Partnership Framework. Landmark Court is within walking distance of London Bridge station, Borough Market, the Tate Modern and the Globe Theatre.

The site has the potential to deliver about 130,000sq.ft of new commercial, retail and workspace.

The Cross Bones Graveyard, a historic graveyard for prostitutes and paupers, adjoining the site, will be safeguarded, with a view to support a high-quality memorial garden.

Subject to contracts and agreements, the joint venture will consult with Londoners to develop a detailed design in order to seek planning permission and to start on site in 2019, aiming for completion by 2022.