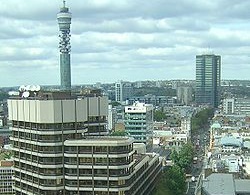 According to Camden Council, The West End Project (part of London's famous West End falls within the borough's control) will transform the Tottenham Court Road area into one of London’s premier commercial, cultural and academic districts.

The authority will be seeking views on the final proposals, with a public consultation going live at camden.gov.uk/westendproject from 9 June.

Camden has secured £26 million of investment to make improvements to provide safe and attractive streets with wider tree-lined pavements. The idea is to boost business and create public spaces for the community and visitors.

The project will be delivered in phases and completed by 2018 in time for the opening of Crossrail, when Tottenham Court Road station will have nearly twice the number of visitors as Heathrow every day. "The improvements will help make this a thriving district enabling businesses to capitalise on the opportunities of increased visitors," said a council spokesperson.

Five public spaces will either be created or improved along with a brand new park. A total of 18,000 square metres of new public realm will be created along with nearly 300 new trees planted in the area. The one-way system will be replaced with two-way, tree-lined streets, some protected cycle tracks and improved public spaces. The scheme will also improve safety, reduce congestion and pollution, widen pavements and improve access to public transport.