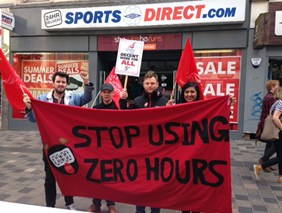 The controversial employment practices of Sports Direct has come under the spotlight with news of ambulances being called to its warehouse ‘dozens of times’.

A BBC investigation published on Monday, following a Freedom of Information request into the Shirebrook facility in Derbyshire, has revealed that 76 ambulances or paramedic cars were sent between January 2013 and December 2014.

Complaints about the attitude of management to workers have led to demonstrations with workers stating they were “too scared” to take sick leave, one woman giving birth in a toilet and 36 cases of ‘life threatening’ cases, e.g. strokes and convulsions. The BBC has passed on its information to the Health & Safety Executive.

Sports Direct which was founded by the controversial owner of Newcastle FC, Mike Ashley, has had a record of being accused of a harsh environment for staff, many of whom are agency workers on zero-hour contracts. According to the trades union Unite, as many as 3,000 agency staff are working at the Derbyshire warehouse complex with one agency using a so-called ‘six-strike’ policy leading to dismissal from working there that include:

Picture: A BBC investigation has discovered a high call for ambulances to Sports Direct’s warehouse facility in Derbyshire and follows a number of complaints against the company, including the use of zero-hour contracts

Sports Direct owner Mike Ashley, who clearly has a touch of the 'if you don't ask questions, then brother I'm your man' about him, provided a mixture of...

The British Heart Foundation (BHF) has urged employers to help workers kick-start a healthier lifestyle during Heart Month following a study that found worrying facts on...