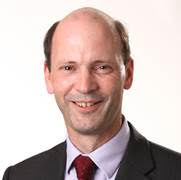 Goodhew will take up his new position from May 8 and Thoden van Velzen takes his on July 1.

Picture: SPIE will be dunkin' Goodhew straight into his new role