Time for Action on MEPs, Not Words 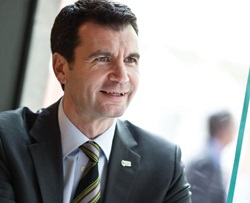 Business leaders from some of the UK’s biggest property owners, developers and occupiers have demanded that the government must end the ‘prevarication’ around the introduction of mandatory energy efficiency standards for privately rented commercial buildings, amid concerns there is ‘significant opposition’ to them within the coalition.

Published before the Queen’s Speech, the UK Green Building Council released the text of a letter sent to Prime Minister David Cameron by the heads of major companies including Legal & General, Whitbread, Land Securities and Marks & Spencer on the government’s proposed minimum energy performance standards (MEPS).

The 2011 Energy Act provides an obligation to upgrade the worst performing privately rented commercial buildings (and homes) – those with an Energy Performance Certificate (EPC) rating in band ‘F’ or ‘G’ – from April 2018. But the group argues the government has so far failed to publish a consultation on the policy.

In the letter, the Chief Executives warn that the current uncertainty around the implementation of MEPS is ‘preventing timely preparations from being made, raising the potential costs of compliance to industry’. Clarity on MEPS, however, could unleash a ‘tidal wave of investment’ in the UK’s perceived, inefficient property stock, helping the UK to capitalise on the global energy efficiency market that is already worth more than £17.6bn to the economy.

Paul King, CEO of the UK Green Building Council, said: “The introduction of minimum energy performance standards in privately rented commercial buildings represents a huge market opportunity for the UK and industry is already gearing up to meet these key efficiency standards.

“But there are concerns that some within the Coalition are dragging their heels on MEPS and delaying its implementation. This could deliver a blow for businesses which are already taking steps to assess their property portfolios and improve poorly performing buildings, as well as the wider property market – with occupiers still facing the higher energy bills that come with energy inefficient buildings.”