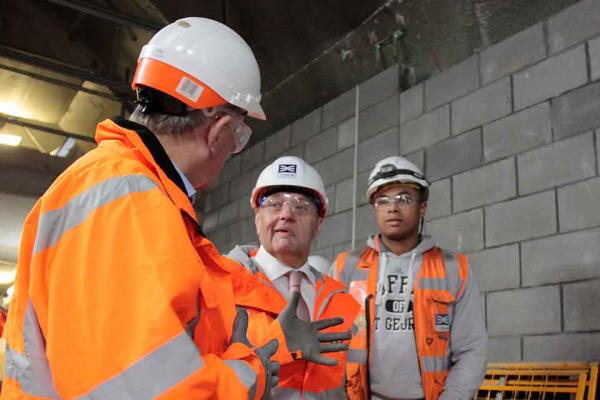 He met the project’s 600th apprentice Kayne Wilson, 21, from Croydon, London, and his colleagues to highlight the career opportunities on offer as a result of government investment in transport.

The minister saw some of the skills and experience the apprentices are gaining working on Crossrail – Europe’s largest infrastructure project, which is now almost 80% complete and is on schedule to open on time in December 2018.

Hayes said: "Before 2010 and after, as Apprenticeships Minister, I championed vocational skills. Now, having the responsibility for skills at the Department for Transport, I am just as determined that the Government’s investment in infrastructure should mean opportunities to gain and utilise skills. That’s why I am here to mark this milestone for Crossrail and recognise the significant contribution apprentices are making to this world class project."

Kayne Wilson joined the Crossrail project as an electrical engineering apprentice for Laing O’Rourke earlier this year. He said: “An apprenticeship has opened up a new career for me and allowed me to gain experience working on Europe’s biggest infrastructure project. My apprenticeship has been a fantastic experience - I get to earn as I learn, I benefit from the experience of others and am able to put what I’m taught in the classroom into practice on site. "If anyone is thinking of starting an apprenticeship, I would say go for it. It’s the best decision I’ve ever made and I’m sure you won’t regret it.

Sir Terry Morgan, Crossrail Chairman, said: “Having started my career as an apprentice I have seen first-hand what apprenticeships can deliver. There are more opportunities than ever before for young people to build exciting careers in engineering and deliver the UK’s pipeline of infrastructure projects."

EngineeringUK is a not for profit organisation, which works in partnership with the engineering community. Tomorrow’s Engineers Week is a national, industry led campaign aimed at encouraging young people to consider engineering as a career choice.

OCS took National Apprenticeship Week as an opportunity to announce that it is launching a new apprenticeship programme in the UK which will aim to recruit up to 900...

The government has set out how apprenticeships will be funded. The Rt Hon Robert Halfon MP said: "Apprenticeships give people more control over their lives and can...

Taking a Shiv to the Levy