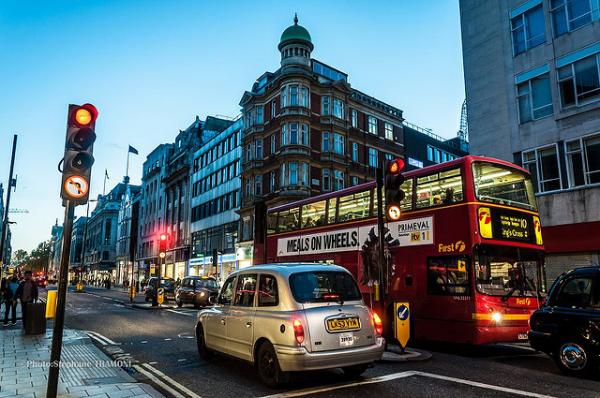 An 73-year old woman pedestrian, struck by a cyclist on Tuesday 12 at about 4:30pm died in the early hours of Wednesday - Cycle To Work Day.

Calls again have been made to pedestrianise  London's Oxford Street where the accident happened - near the entrance to Bond Street Tube station.

Officers from the Met's Roads and Transport Policing Command are investigating and are appealing for witnesses.

The victim was taken to a central London hospital with a head injury. Next of kin have been informed.

The cyclist stopped at the scene but there have been no arrests.

Roads in one of the busiest parts of London were closed for several hours.

In 2017 there have been 12 major injuries to cyclists and five deaths. There have now been two deaths of pedestrians struck by cycles ( a 67-year old woman died on Sept 9 following injuries incurred in July at the Ride London event). 2015 also saw two collision deaths but in 2014 there were six.

Wednesday September 13 was Cycle to Work Day - probably not the best day, given the weather, for promoting the well recognised health benefits of such an activity. However, new research suggests that British workers are dropping lots of exercise habits and losing out on family time as work pressures mount.

Brits have been encouraged to cycle to work to build exercise into their daily routine and reclaim ‘me time’   starting on Cycle to Work Day.

The research conducted on behalf of cyclescheme.co.uk (the organisation behind Cycle to Work Day) reveals over a third (35%) of the working population surveyed in the UK have less than an hour of daily ‘me time’ during the working week, with the majority finding up to just an hour and a half to themselves after work, commuting and other responsibilities such as childcare and cleaning are taken care of.

More than one in three (39%) surveyed say that this is even less time than they had five years ago.

The data was released on September 13 by Cyclescheme for Cycle to Work Day 2017. It shows that the British workers surveyed are increasingly poorly off for leisure time, with almost half (46%) regularly working more than their contracted hours. When feeling pressed for time, 37% of the working Brits surveyed admit that exercise is the first activity to be dropped from their routines, while 26% ditched home cooking for convenience food.

Lack of time for leisure activities has a potentially negative impact on performance at work, with two thirds (66%) of those surveyed agreeing that more downtime would help make them more productive and focused at work.

Cycling to work is a solution that large numbers of UK workers have turned to in the past because of the potential it offers to help regain personal time during the working week and because it aligns health and wellbeing goals. The number of cycle commuters has risen significantly in recent years - over 90,000 more people cycle currently to work than in 2001, according to Cycling UK.

Chris Boardman, Cycle to Work Day Ambassador, said: “Although I love being busy, it’s frustrating when leisure and fitness activities get side-lined by work. But I’ve found a way to ensure I can fit it all in simply by tweaking the way I travel.

Cycling to and from work (or in my case, the station 5 miles away) ticks all the boxes: I get to clear my head after work, my exercise is taken care of without thinking about it, which in turn leaves my evening free for family and leisure. It might be healthy, cost-free transport but more than that, it gives me a better life balance in a way that’s sustainable."

According to Cyclescheme’s research, if given an extra hour each day of ‘me time’, the top activities that Brits would engage in would be reading for pleasure (34%) and exercise (32%), followed by spending more time with their families and partners (28%). The findings also suggest that workers in the UK are so eager for a little more free time that many (46%) would choose an extra week’s holiday over an extra week’s pay.

Adrian Warren, Business Operations Director at Cyclescheme, said: “We can’t let our dedication to our jobs cost us our health and wellbeing. Making space for ‘me time’ is essential during the working week. Cycling to work is a simple way to get more exercise which is shown to make people happier and more productive at work, whilst saving money compared to an expensive gym membership.

"We’re urging everyone from seasoned cycling pros to first-timers to give cycling to work a go and regain time for the things that matter.”

Cyclescheme is a UK provider of a cycle to work scheme and founding member of the Cycle to Work Alliance.

Cyclescheme enables employees to cut the cost of commuting to work. They can get a commuting bike and accessories, make a tax saving between 25-39% and they get to spread the cost too.

To take advantage of the scheme, an employer must be signed up first at www.cyclescheme.co.uk It’s completely free to join. Employers also a free marketing suite of digital and print ready resources to make promoting their scheme easier.

Picture: Calls again have been made to pedestrianise  London's Oxford Street after a woman was struck by a cyclist and died