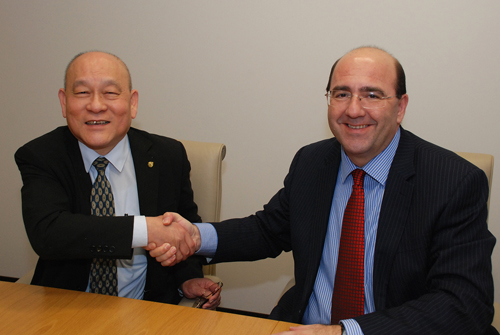 The University of Huddersfield has reached an agreement with Beijing Construction Engineering Group to develop the company’s use of vital new technology.

A Memorandum of Understanding (MoU) between the University of Huddersfield and BCEG will seal a close collaboration with one of the world’s largest construction firms, helping to develop its use of a vital new technology.

Also promised are ‘major opportunities’ for research staff and students, including work placements and possible employment.

Ranked as one of the world’s top 50 contractors, employing approximately 20,000 around the world, BCEG has launched a UK division which coincided when it became part of a consortium investing £800 million in Manchester Airport City to develop surrounding business.

The MoU was drawn up between BCEG UK and the University of Huddersfield, where staff and students at the School of Art, Design and Architecture have developed expertise in Building Information Modelling (BIM). “BIM improves collaboration at the design stage, reduces changes during construction and also improves facility management at the operational stage,” explained Song Wu, Professor of Surveying and IT at the University of Huddersfield.

He has been instrumental in securing the prestigious five-year MoU with BCEG and the key objectives are to develop the company’s experience in so-called ‘lean’ construction, healthcare infrastructure and capacity in  BIM.  This will be done by holding workshops, live projects and will be boosted by research from university staff and students.

Joint projects are planned, special events will be held and there will be placement opportunities at BCEG for undergraduate and postgraduate students of the university, where the School of Art, Design and Architecture has a new MSc. course, entitled Design Integration and Building Information Modelling that was launched in September 2015.

Another of the areas of co-operation drawn up as part of the MoU is the possibility of full time posts with BCEG for graduates of the university.

Professor Wu has taken part in several joint research projects with industry and is continuing to work with China’s Huazhong University of Science and Technology (HUST) on computer modelling of buildings, so that they become more energy-efficient.  The early stages of this work was backed by a Newton Research Collaboration Award from the Royal Academy of Engineering.