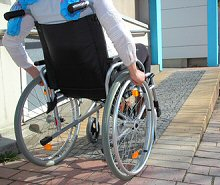 A report* by the Equality and Human Rights Commission finds that the rights of the disabled are not progressing as they should.

The findings will not come as a complete surprise to disability groups since the last one five years ago has also seen a government that has appeared to rein in resources as part of its austerity policies.

The EHRC Chair, Trevor Phillips, reported in 2010 that its first review was a “wake-up call to Britain” and warned that many disabled people and members of other groups were still imprisoned by “prejudice, inertia and unfairness”.

Reporting on the latest review, Disability News Service reports that EHRC had found ‘too many disabled people were being “locked out” of mainstream society due to poverty and isolation and were struggling to secure the support needed to live independently’.

The report had noted that there were fewer ‘gateways to opportunity’ compared with 2010 and that many were still prevented from enjoying ‘full participation in society’ due to barriers in housing, transport, leisure facilities, education and the workplace.

The report’s Programme Director, Colin Douglas, told DNS there were “more areas of backward movement or insufficient forward movement” and that disabled people had suffered as a consequence, particularly from the impact of the recession.

The plight of the disabled in the workplace was relatively worse with no improvement of those in-work disabled, along with problems over the closure of Remploy factories and cap on the Access to Work scheme.

*Is Britain Fairer? The state of equality and human rights 2015.

Picture: The latest report from the EHRC has found too many disabled people were being “locked out” of mainstream society