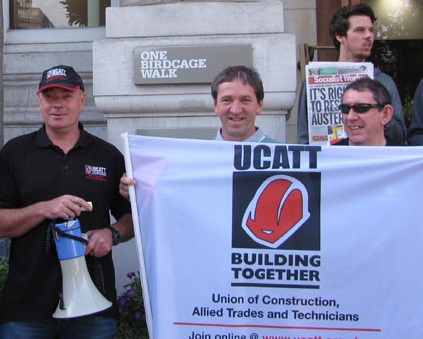 Construction unions UCATT and Unite have joined forces (Weds, Aug 19) for a series of co-ordinated protests at the headquarters of employers’ organisations in London.

The action is over what they argue is the way employers have ‘blocked’ the introduction of the London Living Wage for construction workers.

They believe that last month the employers on the Construction industry Joint Council (CIJC) effectively halted union proposals that all workers employed in the London area and covered by the agreement should receive at least the London Living Wage. Currently the rate for labourers and general operative working under the CIJC is just £8.52 an hour compared with the London Living Wage of £9.15.

UCATT and Unite will stage protests today outside the offices of the: Home Builders Federation, Civil Engineering Contractors Association (CECA) and the National Access and Scaffolding Confederation (NASC).

“The employers are treating workers with absolute contempt,” stated Jerry Swain, Regional Secretary, London and South East Region. “Many construction workers are employed in brutal conditions and have to work excessive hours just to make ends meet. It is frankly disgusting that they should be employed on pay rates below what you need to live on in London.”

However, a spokesman for CECA, denied this was the case when contacted by TwinFM. “The vast majority of our members pay in excess of the Living Wage.” At the time of going to press NASC had not been able to give its response to the demonstration today.

Picture:    Unions demonstrate outside the NASC offices today against what they see as blocking by employers over their members receiving the London Living Wage.