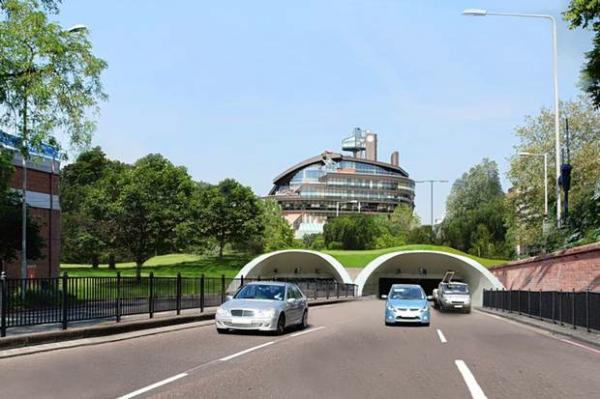 Whilst on a tour of the USA, Mayor of London Johnson stopped-off in Boston to argue the case for five flyunders in London. Boston's own scheme is in operation but like anything that might be expected in the UK, it ran over budget and over time and caused massive congestion during the construction phase.

Meanwhile, the Environmental Audit Committee has demanded that community buildings should not be planned alongside roads as 29,000 die each year from road pollution. One of the 'velvet linings' of the flyunder scheme is that it will release land for...community building projects directly above some of the busiest roads in the country.

Where are the five?

The tunnelling work would be for stretches of the A4 in Hammersmith, A13 in Barking Riverside, A3 in Tolworth, A316 at Chalkers Corner and the A406 in New Southgate.

Announcing the idea in a snow and icebound Boston, Mr Johnson acknowledged that the US city had suffered a crippling overspend and delay in completion but that this could be avoided with careful planning and budgetary control in London. In Boston, what started as an ambitious scheme to remove traffic from the city centre, took on nightmarish proportions. Nicknamed as the ‘Big Dig’, the city’s Central Artery-Tunnel Project became the most complex, expensive road infrastructure project ever carried out in the US. The 3.5-mile road was completed in 2007 and cost an eye-watering US$20 billion.

Boris Johnson conceded that Boston’s experience was a salutary lesson but that that this could be avoided in London if steps were taken and that the costing has already been published. "It's the sort of thing we can do in Hammersmith where the A4 is a very old mouldering flyover, which we could take underground, releasing a huge amount of land that could be turned into a park and other amenities, plus releasing a lot of land for housing."

He believed that a mixture of property development and tolling could be employed to make schemes pay for themselves, resulting in more housing and facilities as well as environmental benefits, e.g. air quality.

The Labour run council in Hammersmith & Fulham has welcomed the Mayor’s commitment this week but expressed concern about the concept of tolling. (The flyover that was built in the 1960s is being patched up and causing congestion with partial closures around Hammersmith Broadway.)

“We just need the Mayor to put his hand in his pocket, instead of wasting £70 million of taxpayers’ cash repairing this monstrosity [Hammersmith flyover],” stated Councillor Stephen Cowan, Labour leader. “Sinking the flyover would free up land to be used for affordable housing, parks and cycling facilities. Our plans are the most developed of those suggested and will help ensure London remains a major trade centre for the twenty-second century and if done the right way, it could be a real gem.”

Any flyunder would have to cope with the 90,000 vehicles a day that use the elevated section of the A4. Current cost of a fully tunnelled 2.5-mile route is estimated to be £1.7 billion.

The latest report from the Environmental Audit Committee has demanded that the government must move against the construction of new schools, hospitals and care homes near to high traffic roads because of the damage to health. It estimates that as many as 29,000 people die in the UK every year from road pollution and that it costs the economy dearly. Read ThisWeekinFM's article from 19 December here

Pictured: An artist’s impression of what a flyunder would look like in Hammersmith, West London, where the existing flyover would be demolished, releasing land for development for housing and other facilities.