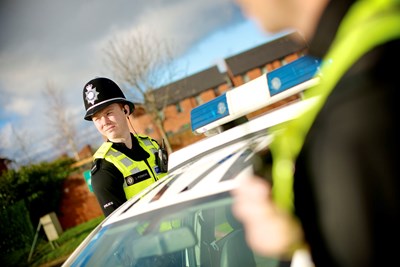 36 police forces took part in the campaign in November stopping 10,012 vehicles and detecting nearly 8,000 mobile phone offences, the highest ever total for a week of enforcement on distraction driving.
More than 7,800 fixed penalty notices were issued as well as hundreds of verbal warnings given and 68 court summons.

Recent studies show use of mobile phones when driving is widespread and the risks drastically underestimated.
The first planned mobile phone enforcement campaign of 2017 was to run from Monday 23 – Sunday 29 January but were marginally curtailed because resources needed to be allocated differently because of bad weather.
Operations for this exercise and those to follow include: targeted patrols using unmarked vans, high vantage points and helmet cams to catch offenders;
partnership with local authorities and emergency services to deter people from taking the risks; digital campaigns to communicate that the risks are more serious than people think; community ‘spotters’ to highlight hotspots and repeat offenders to police.

The campaigns will also advise the public about changes to penalties for mobile phone use whilst driving from 1 March 2017.

A speeding driver, Farid Reza, who killed a 21-year-old woman in Kingston, south west London, has been found guilty of Causing Death by Dangerous Driving and Serious Injury at the Old Bailey where telematics data provided vital evidence in support of the police investigation.

Reza, 36, of Kingston was sentenced to 5 years and 3 months in prison in what the judge described as a mindless act which resulted in the death of a young student.

Reza was also found guilty of causing Serious Injury after 5 children who were travelling in his car were injured.

Although CCTV evidence seized by Met Police investigators showed  Reza was racing his BMW 330d M Sport against an identical model hire car driven by William Spicer aged 28 years, they were unable initially to prove the speed of either vehicle.

In what is becoming a common example of how technology and connected cars are changing the way vehicle accidents are investigated, the Metropolitan Police recognised a key piece of supporting evidence was available from the telematics device fitted to Spicer’s BMW 330d M Sport.

Motor Insurance and Road Traffic Collision investigators, Asset Protection Unit were asked to analyse the telematics data and provided that a precise timeline of events through vehicle events captured during the incident journey.

The CCTV evidence gathered from multiple building locations showed both cars were driving at speed towards the incident area, however they were travelling with a constant distance between them at the incident location which enabled APU’s telematics expert to show Reza’s car must have been driven at least 69 miles per hour, the same speed as Spicer’s, moments before Reza hit pedestrian Hina Shamim.

The APU expert witness was also able to refute an allegation from Reza that Spicer had collided with his vehicle causing him to lose control.

Judge Richard Leon Marks said: “The consequences to Shamim's family are devastating and no sentence I could give would begin to address or consolidate their feelings. I accept that Reza's remorse is genuine but it was only him responsible for putting his foot down on the accelerator that day.”

Neil Thomas, Director of Investigative Services at APU, said: "Accurate analysis of telematics data can be complex but our expert witness was able to assist the police investigation, and present his testimony in a way which helped the Court and the jury fully understand the incontrovertible and unchallenged evidence from the Telematics device."

This week ending Jan 27 saw new sentencing guidelines published that will be used in all magistrates courts in England and Wales. The Sentencing Council is introducing the new guidelines to reflect changes in the law since magistrates’ guidelines were last updated in 2008. For example, the law has changed to give magistrates much greater powers in relation to fines, removing the £5,000 cap and allowing them to give unlimited fines.

For speeding offences, the Council is introducing a new higher penalty for the most serious offenders. This means fines for these offenders will have a starting point of 150 per cent of weekly income rather than the existing level of 100 per cent of weekly income.
The guidelines will be used to sentence adult offenders in all magistrates’ courts in England and Wales from 24 April.