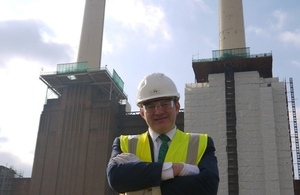 The Department for Energy and Climate Change’s (DECC) interactive online heat map has revealed ‘secret energy’ in over 4,000 rivers, estuaries, canals and coastal sites across the country that together could provide over 6gigawatts of low-carbon heat to communities.

“By installing a water source heat pump people could help eliminate the need for gas-fired domestic heating and a typical household could slash its carbon footprint by up to 50%,” claimed Ed Davey, Energy Secretary, when he launched the new map this week at Battersea Power Station in London. “Doing this will help contribute to an energy mix that maximises clean, reliable home-grown resources rather than relying on foreign fossil fuels. It also provides a system that bolsters growth in our local economies, protects the natural environment, and creates resilient communities that are capable of producing sustainable power systems.”

Battersea Power Station is the latest developer to state that it will be looking into installing a water source heat pump with energy company SSE appointed to carry out a full heat pump feasibility study. The company will also investigate the reuse of existing engineering infrastructure that was built 80 years ago to connect the power station to the River Thames when it was generating power. If a heat pump is installed at the site, it would be one of the energy sources used to provide heat to around 4,000 new homes, shops, offices and public amenities being provided at the Power Station.

“Being located on the banks of the River Thames in central London we are ideally placed to investigate what role water source technology may play in supplying our energy needs and we are delighted that SSE will be undertaking a feasibility study to establish the options available to us,” stated Phillip Gullett, Chief Operating Officer, Battersea Power Station.

Also at the official launch of the heat map was Richard Parry, CEO, Canal & River Trust, the charity that cares for 2,000 miles of waterways in England & Wales. “We very much welcome the announcement, which recognises the huge potential of water sourced heat pumps to deliver a low carbon solution to the UK’s heating and cooling demands,” he commented. “We have a number of innovative projects already underway, or in development, on our canals and rivers. These are delivering benefits for waterside businesses and the environment and proving again that, 200 years after they were built, the waterways are still bringing a whole range of benefits to the nation.”