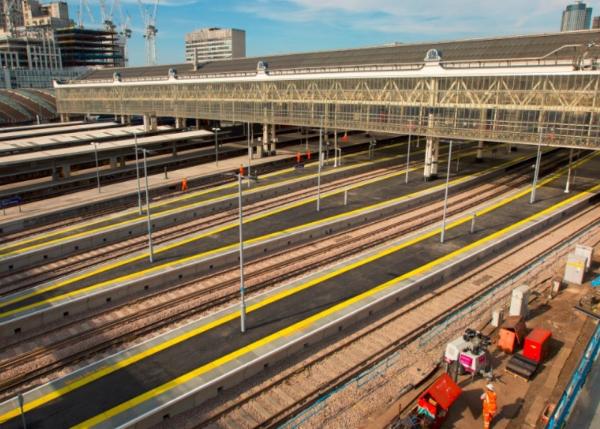 Wednesday August 30 saw a 'good' service on most of the SouthWest Rail train services after Tuesday's fiasco when South Western Railway work to complete platform extensions at London's busiest rail station, Waterloo, went haywire because a signalling test discovered faults that affected a number of stations on the network.

As if things hadn't been bad enough for London train commuters on Tuesday 29, Euston Station was closed at 7:40pm because an E-Cigarette exploded in someone's bag.

No damage was done and nobody was injured but the station was evacuated and London Underground trains did not stop for a time whilst British Transport Police officers and search dogs checked the area was safe. The station (and the Underground) re-opened at about 9:10pm.

A section of the Euston Road (one of London's busiest central thoroughfares) was also closed near the station for the duration.

One Tweet from the Station concourse said: 'Armed police are here; people running and screaming'. Another described a huge police presence.

Northern Rail still expects to run more than 900 services on both strike days between 7:00am and 7:00pm, with final services on some routes finishing before 7:oopm. Services that do run are likely to be extremely busy and may take longer than usual and connections to other services may not be available.

Northern is asking passengers not to travel if possible.

The strike in both regions has been called again in dispute over driver only operated (DOO) trains.

A Northern spokesperson told ThisWeekinFM: "Despite being prepared to guarantee jobs and current pay for our on-board colleagues for the next eight years, until the end of our franchise, our offers to discuss every detail on the future responsibilities and training have been rejected by the RMT to date."

Infrastructure works saw the railway line between Bolton and Manchester closed throughout the week commencing 28 August and it is anticipated that a reduced train service will be in place for the following two weeks.

Southern is planning to run a normal service on most of its routes during the RMT’s strike, although the train operator is asking passengers to check before they travel for updates on the day.

Passenger Services Director Angie Doll said: “We plan to run more than 90% of our services during the RMT conductors strike on Friday and Monday but ask passengers to check before they travel.

“Passenger numbers have doubled in the past two decades giving us the most congested network in the country.

"We ask the RMT to reconsider the very good offers we have made, including job guarantees, and work with us to future-proof services for our passengers - most of whom simply want to get to their place of work each day.”

Southern and Gatwick Express run over 2,200 services on a non-strike day and most services will operate except for those trains listed below:

A 38-year old man has been sentenced after he exposed himself to passengers on a busy train between London and Kent. Tomasz Nowak, of Parkdale Road in London, was found guilty at Maidstone Crown Court on 18 August of outraging public decency.

On 13 May last year, Nowak was travelling on a train between Charing Cross and Dartford. A woman boarded the train and noticed him sat across the aisle from her. He had exposed himself and was touching himself.

Nowak was recognised by officers from the CCTV footage and was arrested soon after the incident.

He has been sentenced to three months in prison, suspended for two years, ordered to carry out 12 hours of unpaid work and received a five year Sexual Harm Prevention Order.

The Night Tube gets/got started on August 19 as TfL (Transport for London) introduced its new Friday and Saturday service on the Central and Victoria lines which are...