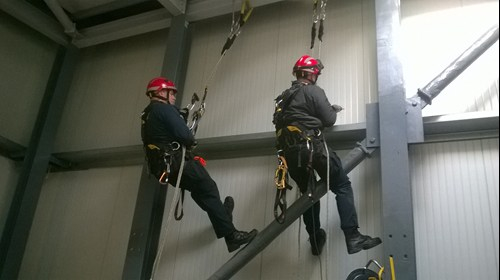 Greater Manchester Fire and Rescue Service (GMFRS) was called to an Ikea store in Wellington Road, Ashton-under-Lyne last Saturday morning after reports were made of metal cladding hanging loose from the fourth floor of the building.

The store, which was due to open at 10:00am, was advised to close as the cladding was hanging loose over a main car park. Specially trained firefighters from Ashton’s Technical Response and Major Rescue Units attended and cordoned off the area.

Crew used ropes and special cutting equipment to fix the cladding to the building from inside.

“We had approximately eight sheets of metal cladding – each piece about 6m to 7m in width and they were loose due to the strong winds,” explained Bob Pownell, Station Manager, GMFRS, who led the operation. “It was too windy for crews to get to the affected area externally, so they drilled holes into the cladding from the inside and secured it to the internal frame of the building.”

GMFRS worked closely with the site’s management and external contractor to make the building safe and the store was open for business later that day. There were no reports that anyone was injured.

The IKEA store opened in October 2006, covering 27,500sq.m and was once the tallest of its kind in Britain.

The Met Office has warned that the Manchester area will experience more strong gales later this week.

Pictured: Crew used ropes and special cutting equipment to fix the cladding to the IKEA building from inside