Working Without Fear - Stalking in the Workplace - SOLD OUT 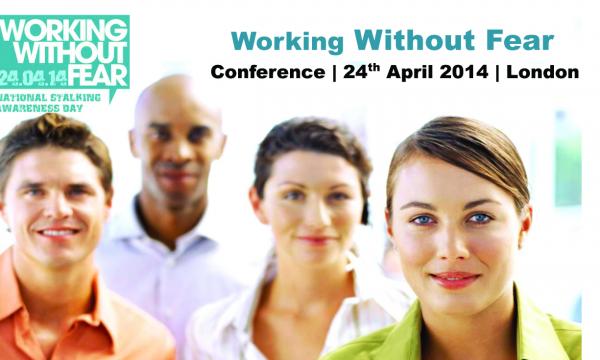 On 24th April, National Stalking Awareness Day 2014, a Working Without Fear campaign will be launched to inform employers and employees about how to deal with the issue of stalking in the workplace.

The campaign will be launched at a Working without Fear Conference in London on 24th April.  Employers interested in attending the conference should email info@suzylamplugh.org

Rachel Griffin, Director of Suzy Lamplugh Trust, which manages the National Stalking Helpline and National Stalking Awareness Day, said: “The issue of stalking in the workplace is far more common than many people think. Research shows that in the UK, 1 in 5 women and 1 in 10 men are stalked at some point in their lives (British Crime Survey 2011). Stalkers can be colleagues or clients - and of those stalkers who are not, 50% will still present themselves at the victim’s workplace. This creates risk not only for the victim but also their colleagues or manager who may have to interact with the stalker if they do turn up at the premises.”

Stalking is repeated unwanted contact from one person to another which demonstrates either a fixation or obsession and causes the victim to feel alarm, distress or fear of violence. Stalkers who are not related to the workplace often make contact with the victim there because of ease of access or simply in order to cause them further distress.

The Working Without Fear Conference

The Working Without Fear campaign aims to inform and advise employers as to what they can do to protect and support their employees if they are being stalked.

The campaign will be launched at a Working without Fear Conference in London on 24th April.  Employers interested in attending the conference should email info@suzylamplugh.org

For more information about stalking in the workplace and to access a Guide to Employers and information posters for employees, visit the National Stalking Helpline www.stalkinghelpline.org