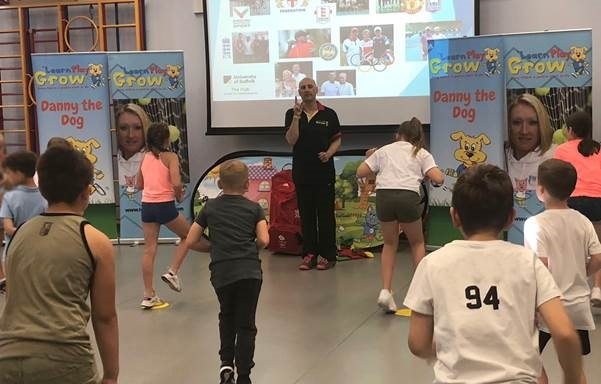 School caterers ISS (amongst other things) have teamed up with children’s sports group Learn Play Grow during the Wimbledon tennis tournament to deliver a healthy living roadshow, promoting child wellbeing across the country.

This is part of ISS’ ongoing support of child health. The roadshow is designed to get children across the country moving, socialising and learning about healthy eating and living.

The programme, devised by Learn Play Grow founder, Nino Severino and supplemented with health messages from ISS’ nutrition team, aims to bring together as many aspects of child wellbeing as possible – from eating well to keeping active, building confidence and developing social skills.

The partnership’s wellbeing roadshow kicked off on the 22nd June and will see Severino and his team visit twelve schools, from south London to North Yorkshire, over the course of a month. Their trip will take them to schools in Barnet, Southwark, Lambeth, Redbridge, Essex, Berkshire, Wakefield and York before finishing in Barnsley on 17th July.

Day one of the roadshow saw 60 year one pupils from Wildridings Primary School in Bracknell enjoy a series of games created to help develop their coordination and teamwork skills, which also tied in  healthy eating and lifestyle messages. Woodhurst Primary School also enjoyed an interactive session, preceded by an assembly where Severino talked to the children about his experiences as an Olympic and British No.1 tennis coach.

Alison Moutrie, Year 3 & 4 Teacher, Woodhurst Primary School said: “The assembly was great, very interesting and enjoyed by the whole school. The session that followed was enjoyable and a fantastic demonstration of how fitness can be fun at all ages”

Nino Severino said: “It’s fantastic to see all the work and development behind the ISS and Learn, Play, Grow collaboration coming to fruition with the start of this nationwide road trip.”

Steve Kemp, Divisional Director, ISS Facility Services Education said: “As well as serving healthy school lunches, we hope to help schools educate children on what they are eating through food education programmes such as healthy eating assemblies, cookery skills sessions and gardening workshops. The addition of the Learn Play Grow programme to these events means that we can continue to evolve the way we support schools and help them to nurture happy, healthy children and communities in as many ways as possible. It’s really great to hear that so many of the children enjoyed the days we’ve had so far and I look forward to introducing the programme to more schools over the coming months.”

Severino, founded the organisation with his late wife, Elena Baltacha-Severino who was the British number No.1 tennis player intermittently between 2002 and 2012.  He and his network of coaches operate across England running motivational wellbeing workshops for Key Stage 1 and 2 pupils. Their aim is to show pupils the link between food and nutrition with physical and mental development. ISS Education’s team of qualified nutritionists have worked with the organisation to incorporate key messaging around healthy balanced food to support active lifestyles into their sessions.