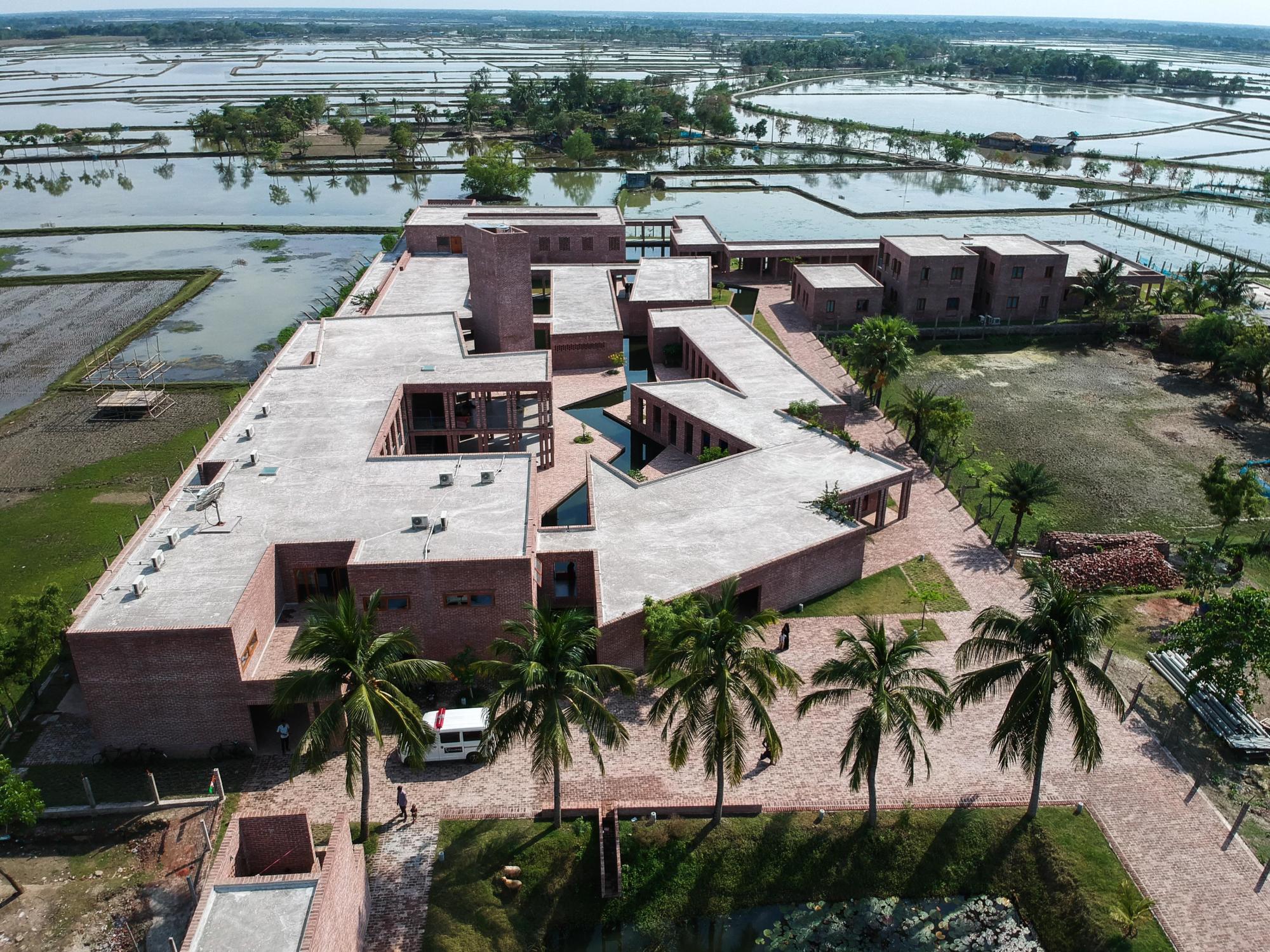 This month, we are looking at the three shortlisted projects of the RIBA International Prize.

The RIBA International Prize 2021 will be awarded to a building that exemplifies design excellence, architectural ambition and delivers meaningful social impact.

Here are the three exceptional projects on the RIBA International Prize shortlist:

Situated in a largely rural area of south-west Bangladesh that was heavily affected by a major cyclone a few years ago, this eighty-bed, community hospital provides much needed healthcare for the local population. Blending into the surrounding water-laden landscape, the low-cost building is designed to work with and withstand the threat of rising water-levels due to climate breakdown.

The hospital is arranged around a series of intimate courtyards, which bring in light and natural ventilation. A canal of water cuts through the length of the site, separating the inpatients and outpatients, whilst collecting rainwater stored in tanks - a valuable resource in an area where the saline groundwater is unusable for most practical purposes. This outdoor space creates intimate areas for patients and visitors to sit and rest with viewpoints of the local countryside.

Crafted in local brick chosen for its resilient qualities and low cost, openings in the brickwork offer private shaded areas and provide natural cooling for the wards essential for this hot climate.

The judges felt that the building has the potential to be a sustainable and affordable blueprint for other clinical facilities in rural regions.

Kashef Chowdhury, Kashef Chowdhury/URBANA, said: ”It is indeed a great moment when a recognition as important as this helps to bring attention to a remote corner of our incredibly connected but unknowing world, to a project born out of scarce resources, for the care of people and community destined to live in the fragile environment of a climate in flux.”

Museum Island, Berlin is one of the most significant cultural sites in the world, attracting millions of visitors each year. A Unesco World Heritage Site, the James-Simon-Galerie serves as the new entrance building to Museum Island, providing both a new public space for the city and access to the other museums that are situated there, including the Pergamon Museum, the Altes Museum and the refurbished, Chipperfield designed Neues Museum. The building is named after James Simon, one of the city’s most important patrons of the arts in the early 20th century.

Picture: a photograph of the James-Simon-Galerie taken from the water. Image Credit: photograph by Ute Zscharnt

The building has been twenty years in the making and is the latest development in Museum Island’s masterplan by the practice. The challenging design brief required a new building that would respond sensitively to its historical context whilst offering a contemporary museum experience within a narrow strip of land on the island. The architects have created a design that blends the Neoclassical with the modern. The commanding temple-like entrance way, colonnaded walkway that wraps around the building and projects out to the city and lofty interior lobby space is monumental in scale and stature.

The main visitor facilities lie within the subterranean spaces of the building, including an exquisitely crafted 300-seat auditorium and temporary exhibition gallery. This lower floor of the galerie leads to an underground walkway through which visitors can access the surrounding museums.

David Chipperfield, David Chipperfield Architects, said: ”We are honoured and grateful that the James-Simon-Galerie has been shortlisted by the jury for the RIBA International Prize. Our work on the museum island began more than twenty years ago with the reconstruction of the Neues Museum and the development of the museum island masterplan. The James-Simon-Galerie evolved out of this long collaboration that engaged us deeply, not only in the museological, architectural and civic opportunities and challenges of the museum island but also in the complex considerations and debate concerning the reconstruction of Berlin after the reunification of Germany.”

The Lille Langebro is a cycle and pedestrian bridge like no other. At the centre of the bridge, two rotating sections swing open vertically, allowing for marine traffic to pass through.

Picture: a photograph of the bridge from the air. Image Credit: photograph by Rasmus Hjortshøj

The mechanism is buried within the bridge’s piers and opening structure so as not to interrupt the continuous line across the water. This is the first time this engineering approach has been used in swinging bridge design, breaking new ground in the field.

At 160m long, the bridge follows a gently curved path across the water, giving the bridge a light and slender visual profile that allows views across the harbour. The surrounding structural supports create two giant wings on either side of the deck and along with the pier arms are painted in dark grey to blend in with the water.

The bridge ensures that cyclists and pedestrians can use the bridge safely at the same time, with sufficient width for two separate travel lanes. The needs of all users are considered, including those who must or simply choose to walk slowly and people reliant on the use of a wheelchair or mobility scooter.

Jim Eyre, Founding Director at WilkinsonEyre, said: “Lille Langebro has proved to be a popular project with Copenhagers whether on two feet or two wheels; I think it has fully justified the vision and commitment of our client Realdania. We are delighted the project is now recognised by the RIBA International Awards and hope the design makes a lasting contribution to its delightful setting.”

Picture: a photograph of Friendship Hospital from the air. Image Credit: photograph by Asif Salman Courtesy of URBANA