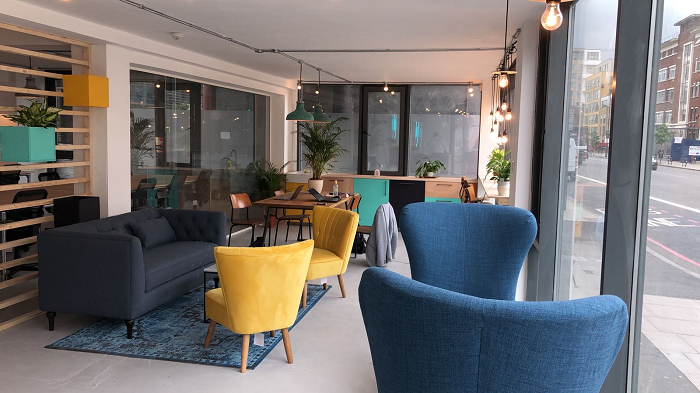 As the corporate world spend millions competing with weird and wacky office designs, new research reveals that Brits actually want a flat white or cappuccino as two-thirds said a caffeine kick is the most important feature in their dream office.

Research by international coworking developer, Areaworks also revealed a tipple while they work was important for the majority, as 66% included a booze-filled fridge among their choice items.

Being closer to the outdoors, and the ability to work from a balcony or roof terrace was a deal breaker for 64%.

Hanging chairs, bean bags and flexible spaces are a must for most, as half of office workers want to ditch fixed desks in favour of casual seating and hot desking, making it a top five most favoured feature.

Despite fireman’s poles and ball pits being installed in offices up and down the country, it seems online fashion retailer, Missguided’s selfie tunnel is misjudged and UKFast’s slide is a step too far, as the office gimmicks failed to feature on most people’s workplace bucket list.

Those in marketing, recruitment and HR are most likely to want to work alongside their four-legged friends, while those in retail, social care and pharmaceuticals simply want some fresh air and outdoor space.

The nation’s workforce was polled on which celebrity coworking companions they would like to share the ideal space with.

20% of UK workers picked David Attenborough, famed for his encyclopaedic knowledge of the world, as their top choice of dream office co-worker.

While 1 in 5 would rather share an office space with Sir Richard Branson as they believe the famous entrepreneur would share his care-free business spirit.

37% want a comic colleague, with Michael McIntyre, Graham Norton and Jimmy Carr all listed as dream workmates, proving laughter is the key to a happy workplace.

1 in 6 would like Countdown’s Rachel Riley to help them with their finance and accounting queries, while BBC’s Britain's Best Home Cook star Mary Berry and her delicious bakes mean she is a dream colleague choice for 1 in 10.

Panny Lawrence, Founder and Director of Areaworks, said: “It’s intriguing to see what makes the dream workspace for the nation’s office workers, and what is top of the list when it comes to furnishing and designing the ultimate space.  Areaworks welcomes a wide range of professions and people to its working community - although we can’t guarantee you’ll be sharing a space with Elon Musk and Steve Jobs, we have created the perfect space for the next generation of UK entrepreneurs.”

Like-minded people, those with complementary skills and creatives were the qualities which Brits hold in highest regard when it comes to choosing a workspace.

Lawrence continues, “Traditional attitudes to what should be in a workplace are fast changing, as twice as many millennials would like office games such as table tennis and table football than their older counterparts.

“Happy and relaxed workers are likely to have increased productivity and motivation, as well as making more money and generally enjoying their work. Character and a sense of community are important for building successful businesses and make collaboration and commerce easier and these are the core pillars of everything we do at Areaworks.

Areaworks and its parent company, The Nao Group (formerly WSC) follow in the footsteps of Google, Amazon, and McKinsey that have invested in the Hoxton and Shoreditch area.

Membership packages start from £249 per month for a flexible desk and dedicated desks from £299 per month. Those who sign up for a 12-month term will also receive their first month’s rent free of charge.

Lockdown remote working taught us the importance of workplace wellbeing, so which countries offer the best workplace environments around the world? Acuity...

The market is full of solutions to help improve employee confidence and encourage people to come back to the office. Workplace management technology can play a huge part...

University College London researchers say that the view from your work desk can dramatically affect productivity, so where can you find the best office views in the...

According to union safety representatives, some businesses may be asking employees to return to unsafe workplaces as restrictions start to lift across the UK, but...