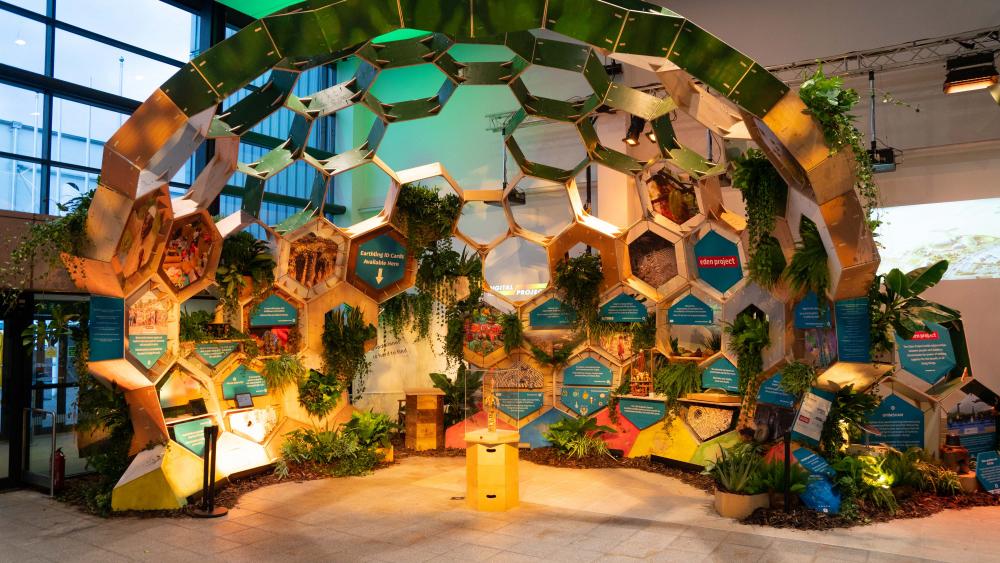 The Eden Project has partnered with international architecture practice Grimshaw in the delivery of the Eden Project Pavilion at the UK-hosted 2021 COP26, in Glasgow.

Located in the Blue Zone in the Scottish Exhibition Centre, the Eden Project Pavilion is a showcase of, and call to arms for, the actions needed to regenerate our fractured planet. It harnesses the geodesic design reminiscent of the Eden Project biomes in Cornwall in the UK, designed by Grimshaw, but this time its collapsed panels reflect the planetary crisis we have entered.

The concept of the Pavilion has its origins in the Next Generation Design project – a two-day workshop on architecture and engineering led by Scale Rule, a community interest company focused on working with 11-18-year old students.

In 2020, the winning design from the workshop – where teams create sketches, models, and drawings of their proposals – was Harris Boys’ Academy East Dulwich in London. The original design was conceived as a "manipulation of earth by human hands" states the Harris Boys’ Academy team, ‘the dome represents the earth and the hands show humankind; this pavilion represents the damage humans have done and are doing to the planet.’

At COP26 the Eden Project Pavilion houses a "cabinet of climate curiosities" – objects that represent the urgent transformations required, which in turn have nurtured an ecosystem within the dome. Plants climb up and in through the cracks as biodiversity once more returns.

The Pavilion creates a narrative of hope and positive change, recognising the potential we have to heal our broken planet.

The structure, designed by Grimshaw - adapting and developing the original concept - and fabricated and constructed by Sir Robert McAlpine, uses only materials that have been grown, reused or recycled. While visually creating a metaphor for the planetary emergency, its design is inspired by nature: minimum materials for maximum strength, with the reused plywood structure supporting the abundant planting and exhibit elements.

Made From Recycled and Reused Materials

The recycled and reused materials have been sourced from local construction sites and from the stage used for the outdoor Eden Sessions concerts in Cornwall.

The curios are a diverse collection of objects, artworks, media, models and installations; each represents a perspective, value, or insight that is part of Eden’s philosophical ecology, while also being a gateway into a specific Eden affiliated project: from automata that speak to our interconnectedness with the natural world; to augmented reality and planet positive artworks; to immersive media that reveals the invisible worlds around us; or geothermal drill bits and solar energy trees that speak of an end to fossil fuels.

The Pavilion also asks us to consider our connections and shared responsibilities: not as delegates of nation-states, but as Earthlings wholly dependent on the health of the one planet in the universe we know to be suitable to life. This forms the context to the Pavilion being a stage to convene, relax and recharge during a fortnight critical to the health of all life on Earth.

The design, construction and delivery of the Pavilion at COP26 brings together the original team behind the design and delivery of Eden Project Cornwall - Eden Project, Grimshaw and Sir Robert McAlpine - which after 20 years of operation has attracted 22 million visitors, creating a £2.2 billon impact on the local economy.

David Harland, CEO, Eden Project International, said: ”We are honoured to be part of this hugely important event and hope that visitors to the Eden Project Pavilion will be entertained and enlightened in equal measure. We're very proud of what we've achieved, alongside our partners at Grimshaw and Sir Robert McAlpine particularly, and hope that COP26 will mark a new era of global cooperation to tackle the environmental challenges that all of us as Earthlings face."

Andrew Whalley, Chairman, Grimshaw, said: “The design of the biomes at Eden Project Cornwall was driven by care for our natural habitats and the environment. Bringing this design approach to the COP26 conference as part of the Eden Project Pavilion will carry this ethos to delegates and world leaders and highlight the design and construction industry’s role in tackling the climate and biodiversity challenge.”

Paul Hamer, CEO, Sir Robert McAlpine, said: “Construction has an active role to play in the collaboration for climate action. 20 years after Sir Robert McAlpine constructed the iconic biomes at Eden Project Cornwall, we are proud to be working again alongside Grimshaw on the Eden Project Pavilion at COP26, which sends a powerful message, to global leaders and individuals alike, on the actions we need to take collectively to address the climate emergency.”

Jamie Allison, Assistant Principal, Harris Boys’ Academy East Dulwich, said: “We are hugely proud that the students involved in the Scale Rule workshop, and Harris Boys’ Academy East Dulwich, can evidence a sustainable project taken from concept through to production, particularly for such a major world event such as COP26. Seeing how our STEM curriculum has real-world impact and relevance is inspiring."

Picture: a photograph showing the cabinet of curiosities