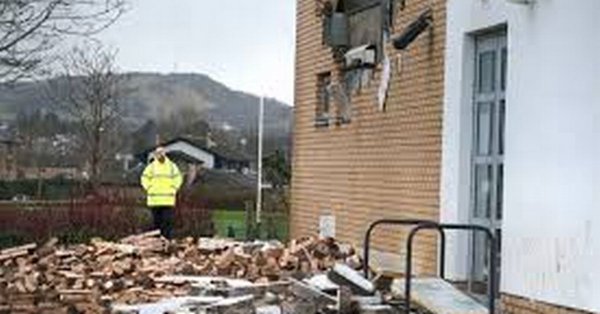 A report out on April 3 said councils must learn lessons to maintain the safety of public buildings following the Edinburgh school wall collapse of January 2016.

The Accounts Commission has highlighted important lessons for all councils following the collapse of a wall at Oxgangs Primary School during a storm.

'It was a matter of timing and luck no children were caught under the 19 tons of masonry that fell', an independent report had found previously.

There were serious faults in procurement, design and construction which also then led to the large scale closure of other schools in Edinburgh. Similar faults to those identified in the construction of Oxgangs were also found in other City of Edinburgh Council buildings, including libraries, community centres and care homes. In all 19 buildings were closed for inspection and remedial work.

Edinburgh Council reacted particularly swiftly to Oxgangs as a 12-year old girl had died at another school (Liberton High School) in 2014 when a wall in a changing room collapsed on to her. (The wall in question was a free-standing interior wall unlike those referred to in the current report.)

The report emphasises the importance of all councils undertaking regular, comprehensive structural risk assessments and inspections on public buildings to ensure the safety of service users. 'Where a council employs a company to provide construction services, it's vital that it puts in place appropriate checks and controls', says the report.

The report recognises the substantial amount of learning already taken forward as a result of this case, but says it is vital that all councils have a clear understanding of the roles and responsibilities of those involved in the control and assurance of the construction of public buildings. Graham Sharp, Chair, of the Accounts Commission said: "The City of Edinburgh Council responded quickly and comprehensively to the wall collapse at Oxgangs Primary School. However, all councils in Scotland must ensure public buildings in their care are regularly checked and appropriately maintained.

"While reduced resources mean councils must make difficult decisions about service provision, they should  have an appropriate level of expertise to deliver and safely maintain buildings. People must have confidence in the safety and integrity of public buildings."

Picture: Councils must learn lessons to maintain the safety of public buildings following the Edinburgh school wall collapse says a report out April 3.