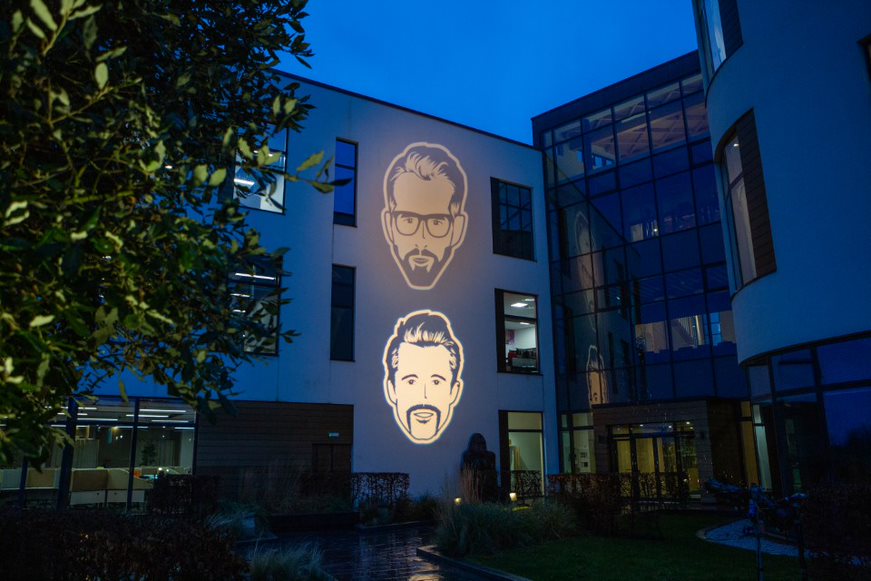 Moneypenny's UK headquarters in Wrexham was lit up with the images of world-famous actors Ryan Reynolds and Rob McElhenney, after it was revealed that the two men had purchased the local football team, National League side Wrexham A.F.C.

The celebrities have promised to invest at least £2 million in the club.

Ryan Reynolds has starred in major films such as Deadpool and Green Lantern, whereas Rob McElhenney is best known for creating and starring in the sitcom It's Always Sunny in Philadelphia.

Ceri Henfrey, Head of Operations at Moneypenny said:  “If it’s huge news for Wrexham FC and our local community, then it is for us Moneypenny too.  It was only right that we said congratulations and we’re delighted we could welcome the new owners Rob McElhenney and Ryan Reynolds in our special way.

“We must say big thanks to Mike McCoole, Lightech Sound & Light Ltd. and Melissa Cross for helping to make this happen too.”

Are We Already Living a Four-Day Week?

Research shows that business activity and productivity levels on a Friday have dropped by 15 per cent in the last 12 months. Fridays are increasingly becoming a...

One of the biggest changes to come from COVID-19 is a new expectation for 24/7 accessibility.  No longer reserved for big consumer brands, there’s a growing...

ThisWeekinFM's Workplace Excellence channel at RE:Connect hosted a variety of sessions from several industry speakers – and you can catch with them...