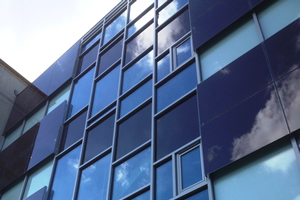 New British technology will turn glass panels and windows into solar panels and could turn our glass skyscrapers into power stations - claims a Cambridge company which launched a funding programme on CrowdCube - Friday June 8.

Britain’s estimated 1 billion windows could become the power generators of the future, letting light through while harnessing solar energy claims Polysolar, which is already manufacturing transparent solar panels. Investment will accelerate manufacture and develop the next generation of photovoltaic (PV) windows according to the company.

A typical 1200mm x 600m glass panel can generate on average 5kWh of power each month (equivalent to half a day’s power consumption for the average home), say the people at Polysolar who also claim  London’s Shard, which has enough glass to surface eight football fields, would, if fitted with their glass, generate some 2,500MWh/year, enough (when combined with a reduction in air-conditioning loads) to create a zero-carbon building or power the annual energy needs of 1,000 houses.

Currently, a typical panel will cost about twice the price of a conventional glass panel - manufacturing in volume should bring this price down.

Hamish Watson, CEO of Polysolar, said: “We’ve invested over £1.5 million to get where we are today and we now have a commercial product and a huge potential market.”

Picture: The Future Business Centre in Cambridge where Polysolar provided PV glazing for the stairwell curtain walling and the decorative rainscreen cladding. This saw the first truly transparent curtain wall elements deployed in the UK and a BREEAM rating of Excellent.