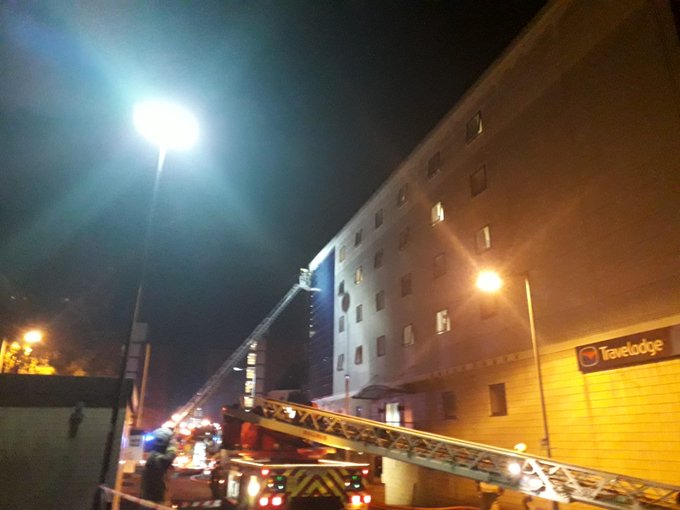 A fire at a Travelodge hotel on December 4 prompted ThisWeekinFM to ask was any type of cladding (particularly aluminium panels containing a plastic filling)  present?'

The question was put to both the London Fire Brigade (LFB) and Travelodge's owners.

The LFB were quick to respond saying that as with all fires, a full investigation will take place but at this stage, a cladding is not thought to be a factor.

A Travelodge spokesperson responded: "This morning, (Wednesday 4 December 2019), reports were made of a fire at our hotel at London Kew Bridge, Brentford.  The emergency services attended and have subsequently confirmed that guests have been safely evacuated and there are no reports of injuries. Guests are being looked after locally and our team are now making arrangements for their future accommodation and support. We continue to work with the emergency services at the site and would like to thank them and local agencies for their rapid response.

"The hotel was a mixed construction building and we are reviewing all the building details as part of the investigation into the incident. As this is an ongoing investigation and we are trying to support the London Fire Brigade in any way that we can, we don't want to speculate further."

After Grenfell, it was discovered that after residential tower blocks, the most popular building type for similar cladding as implicated in the disaster, were hotels - particularly budget hotels.

Travelodge the UK’s first budget hotel chain which operates 586 hotels across the UK, Ireland and Spain is continuing to invest in its estate.

Fifteen fire engines and around 100 firefighters dealt with the blaze. London Fire Brigade Assistant Commissioner Graham Ellis was at the scene. He said: “When firefighters arrived they were faced with a rapidly developing fire. A single storey bin room on the ground floor of a neighbouring building was alight and the fire had already spread to the adjacent hotel of five floors."

It is the speed at which the fire developed that led to the question over cladding.

On December 2, around 40 firefighters were called to another fire in a bin store at a block of flats in London's Bethnal Green.

Assistant Commissioner Graham Ellis continued: "Fire crews' offensive firefighting helped stop the fire spreading further and protected large parts of the building. The Brigade’s Control took seventeen 999 calls to the visible blaze. Firefighters carried out a systematic search of the hotel and around 160 guests and staff evacuated the building. There were no reports of any injuries. A rest centre was set up by the local authority.

"This is an excellent example of multi-agencies working together to bring a challenging incident under control with no injuries. Police, London Ambulance Service, Hounslow Council, Transport for London and Travelodge’s cohesive approach is ensuring that normality can be restored to the local community as quickly as possible."

The Brigade was called just before 3:00am and the fire was under control by 7:00am.

The LFB Tweeted #Brentford hotel fire is under control. Firefighters will be at the scene throughout the morning damping down pockets of fire. Please avoid the area if possible.

Newbury London Road Travelodge has just received a £166,000 hotel refit which includes work in all 67 en-suite rooms and public areas.

Picture: A Travelodge in London's Brentfor has quickly caught alight raising questions about whether cladding was installed.